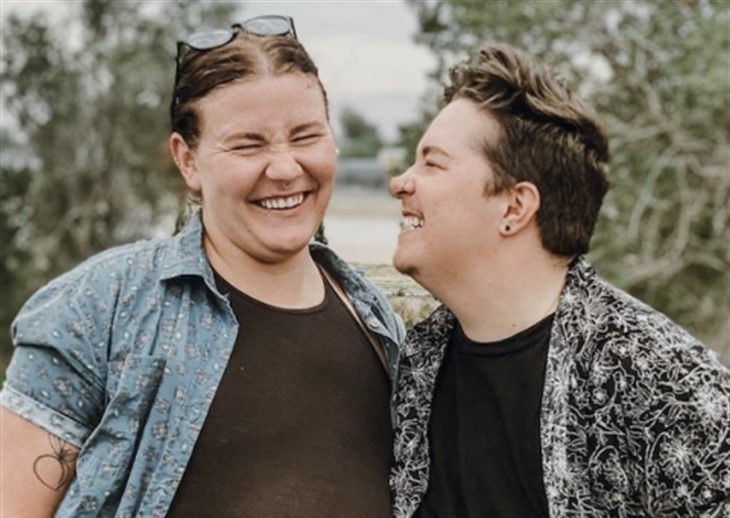 Sister Wives stars Meri and Kody Brown had a daughter and they named her Mariah. Over the course of the TLC show, fans saw that Mariah later came out as gay and she became engaged to Audrey Kriss. More recently, Mariah declared herself trans and adopted the name of Leon Brown. Additionally, Leon adopted the pronouns they/them. This week, she revealed her top surgery.

In September last year. Audrey Kriss celebrated the first anniversary of their top surgery. Actually, happiness seemed very obvious, and many fans applauded. In fact, the transformation of Audrey who kept their original name produced a handsome appearance. And, a lot of folks liked the mustache that grew out. At the time, TLC fans had already heard that Leon opted to go trans as well.

Sister Wives fans suspected that Leon might have had their top surgery done already. However, this week the confirmation arrived via Leon’s TikTok. Shared across social media, a lot of people don’t really mind what Leon chooses to be. But, it meant that some folks scratched their heads because they don’t understand if this means the couple are no longer engaged. However, those folks who know more about LGBTQ+ suggested that Leon decided that gender-free is best.

After the TikTok video appeared, Blogger John Yates shared it on his Instagram. Actually, John’s gay and he offered no criticism. Mostly fans and followers seemed to not understand why the two people both went trans. Bear in mind, Leon had talked about having babies one day. If nothing else, it supports the trend that men can have babies.

On Instagram, one Sister Wives viewer wrote, “So she was dating a girl who transition to a boy and now she’s transitioned to a boy? Are they still together??” Obviously, it takes time for people to adjust to the new normal in the USA. Although the LGBTQ community often condemns people who question things, it seems that folks genuinely want to understand.

Sister Wives fans who saw the video on TikTok also reacted. Some commenters were also a bit confused on that site. However, more congrats and approving comments went in. One of them said, “Becoming someone who loves themselves is so liberating 🥰.”

Another fan wrote, “In April my kiddo got top surgery and it’s such a game changer! I’m so thrilled to see you sharing that!! It’ll help so many others!!”

Many people love that Leon Brown revealed the top surgery and stands as an example to those who might be hesitant to do the same thing. What do you think? Let us know in the comments below.

Days Of Our Lives Spoilers: Xander And Gwen Give Up On Redemption, Bad Is Easier Than Good?