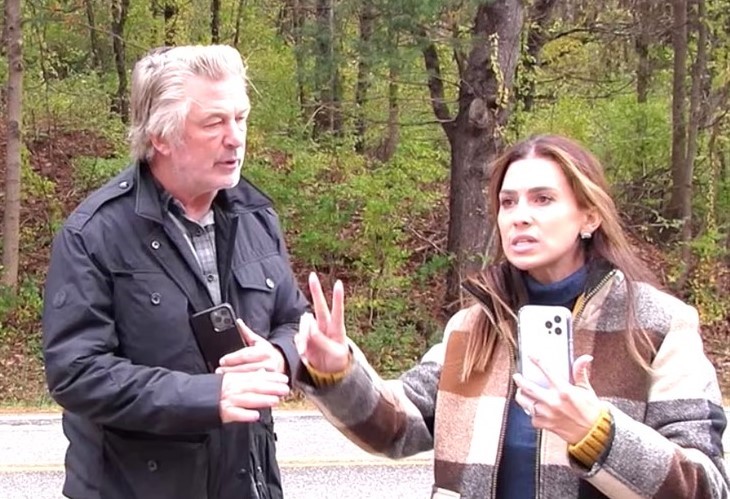 Alec Baldwin and his “Rust” movie shooting scandal remain in the spotlight.  And recently, Alec’s wife Hilaria Baldwin attempted to shift the focus by sharing on Instagram. But rather than improve the situation, Hilaria received slams for her posts.

Find out exactly what Alec’s yoga teacher wife put on Instagram that caused so many followers to clap back. Plus: What’s next for Baldwin and his family? Learn more below.

Last month, in the midst of filming the “Rust” movie, Alec Baldwin accidentally shot a colleague, cinematographer Halyna Hutchins. The 63-year-old actor’s gun shot allegedly resulted in the death of the 42-year-old film professional, and set off an investigation that continues.

In the wake of the shooting scandal, Alec, his wife Hilaria, and their children have stayed in a Vermont mansion, reports Radar Online. Safe from any media attention? Not exactly.

While Halyna Hutchins’ family and friends mourn what many believe constitutes a preventable death, Hilaria has gotten slammed for her Instagram posts. Some point to the yoga instructor’s pics as an attempt to turn her own family into the focus of the tragic situation.

For instance, Hilaria recently posted an Instagram montage showing the Baldwin’s cheerful kids playing around their Vermont mansion. “Checking in and sharing a few moments,” wrote the 37-year-old. That post, accompanied by upbeat music, struck a discord for many of her followers.

In addition to her happy montage of her kids, Alec Baldwin’s wife faced slams for a confusing Instagram post in which she both slammed the media and shared that her family had found their lost cat. Her caption for the cat pic began on a positive note. “We found him. Thank you to all of those who helped. I’m so grateful, beyond words,” wrote Hilaria.

But then the yoga instructor used the moment to bash the media. Sharing that she would not mention any names of those who helped her find the cat, Hilaria added, “The paparazzi and tabloid media are calling every single connection to us, and I don’t want you to be harassed too, in their frenzy to make more money. As I write this, there are people, taking my picture, through the trees of the property we are staying at.”

Alec’s wife revealed that the media has not respected her family’s request for “space,” alleging that the press have “chased” them in cars. “Several scary moments…this is dangerous. Please listen,” she added. And then, in an update about the cat, Hilaria added, “Emilio seems to have a broken leg, but he is alert. Fingers crossed he will pull through.”

Radar Online alleges that the Baldwin family have been “hiding out” in Vermont as Alec and Hilaria continue to face criticism for the way that they have allegedly sought “sympathy and attention.” For instance, yoga instructor shared pics of the family’s Halloween while Hutchins’ 9-year-old son mourned the death of his mother.

Since the October 21 shooting in New Mexico, the Baldwins have reportedly remained in Vermont. In addition to Alec and Hilaria, the family includes six children: Carmen, 8, Rafael, 6, Leonardo, 5, Romeo, 3, Eduardo, 1, and Lucia, 7 months. The “Rust” film project on which Alec worked reportedly remains on hold.

What do you think of Hilaria Baldwin’s Instagram posts? Do you sympathize with Hilaria and Alec? Share your views with us. And then check back on our site for all the celebrity news.