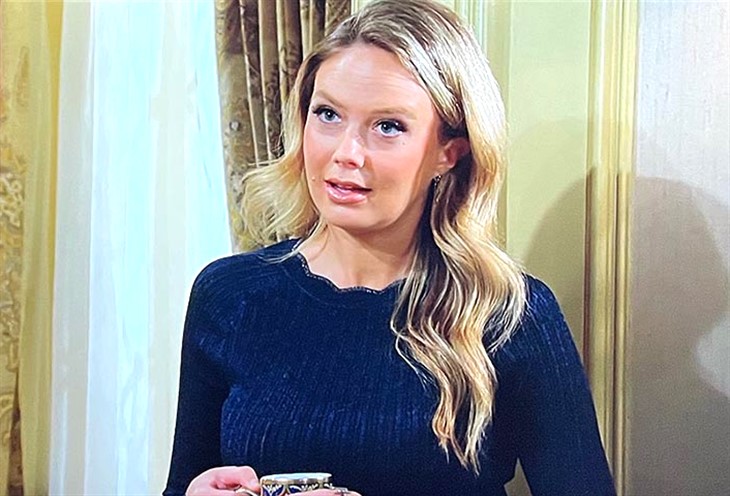 The Young and the Restless (Y&R) spoilers and updates tease Abby Newman (Melissa Ordway) has been dealing with heartbreaking news. Abby has been told that her husband Chance Chancellor (Conner Floyd) has been killed in an explosion. Abby is trying to find a way to accept that Chance is dead but she cannot do it.

Abby has found comfort from her sister Victoria Newman Locke (Amelia Heinle). Victoria understands that Abby wants to find a way to know more about Chance. Victoria is facing a similar challenge because her husband Ashland Locke (Richard Burgi) is fighting a battle with cancer. Abby and Victoria do not want to lose their husbands.

Abby does not want to believe that she will never see Chance again. Abby wanted to go to the place where Chance and his fellow agents were staying. She wanted to see the bomb site for herself and to start her own investigation. Christine Blair Williams (Lauralee Bell) has been keeping in touch with the local authorities and her other contacts in order to find Chance.

Christine has advised Abby to stay in Genoa City and let the authorities find Chance. Victoria has been able to convince Abby to stay home and take care of her son Dominic Phillip Newman-Abbott-Chancellor (no actor’s name known for this important role). Victoria understands that Abby wants to find Chance and that she does not want to face her life without him.

The Young and the Restless Victoria has been preparing herself for the worst outcome with Ashland. She decided that she wanted to get married to Ashland so that they could face Ashland’s uncertain fate together. Ashland may not be able to get the experimental treatment or it might not work. Ashland may not have long to live. Victoria may decide that she wants to keep a part of Ashland with her. Would Victoria decide that she might want to have a baby with Ashland? Abby believes in her heart that Chance could be alive. She does not want to give up on the hope that Chance could be in a place where he cannot come back.

Will Abby find a way to get to Chance to bring him home? Abby and Victoria are not going to give up until they have tried everything that they can to hold onto Chance and Ashland. Can Abby and Victoria find a way to bring about a miracle for Chance and Ashland? Be sure to catch up on everything happening with Y&R right now. Come back here often for The Young and the Restless spoilers, news, and updates.