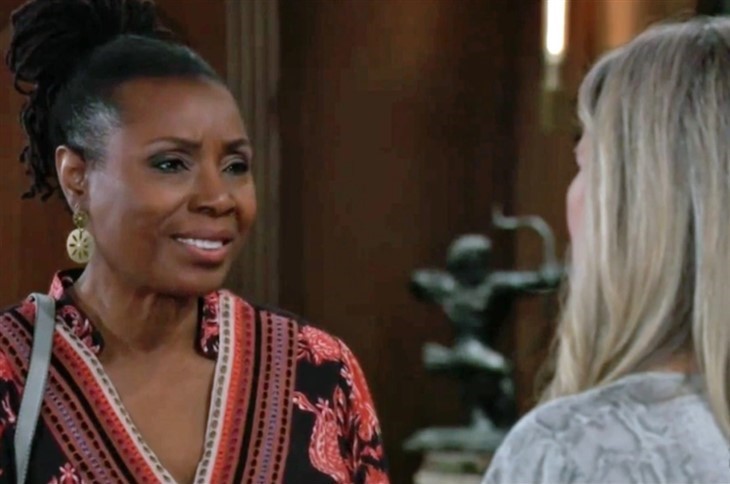 General Hospital (GH) spoilers indicate that while Sonny Corinthos (Maurice Benard) is off doing other things, Carly Corinthos (Laura Wright) has a heart-to-heart talk with Phyllis Caulfield (Joyce Guy). Will Carly learn a lot more than Sonny wanted her to?

General Hospital’s Sonny wants to protect Nina Reeves (Cynthia Watros) but Carly doesn’t know why. Carly wants to know more about Phyllis as well as Sonny’s life in Nixon Falls. Sonny hasn’t given Carly a lot of information about his time in Nixon Falls because he wants to keep his relationship with Nina a secret. Sonny knows that Carly would go after Nina full force if she knew the truth and there would be no stopping her. Unfortunately, Phyllis could slip up and give Carly information that Sonny doesn’t want her to have. Phyllis could even let it slip that Sonny was in love with Nina when he thought he was Mike. Phyllis could blow Sonny and Carly’s life apart by saying the wrong thing.

General Hospital’s Phyllis has no idea how Carly would react if she learns about Sonny and Nina. Carly knows that Nina knew all along what she was doing and will take this relationship as another way to hurt her. Carly is hoping that the court case in Pennsylvania will send Nina to prison for identity theft. Carly wants Nina to pay for every month that she kept Sonny from her. Phyllis has never seen the rage that Carly can show when she feels she has been wronged. Will Carly completely lose it on Phyllis?

General Hospital’s Phyllis may not tell Carly anything about the relationship between Nina and Sonny. However, if the truth comes out later, Carly will be that much more furious. Sonny has had plenty of time to come clean about his feelings for Nina. Carly and Jason Morgan (Steve Burton) were honest about their relationship while Sonny was missing. Sonny knows that Carly and Jason planned to have a real marriage if he hadn’t returned. What Sonny doesn’t know is that Carly and Jason fell in love while he was gone. With both of them lying it is only a matter of time before the truth comes out. What will happen when Sonny and Carly learn about the other’s love life while they were apart?

Sonny and Carly are going to have a great deal to discuss when the truth comes out. Can Sonny and Carly get past these issues and move on with their life together?