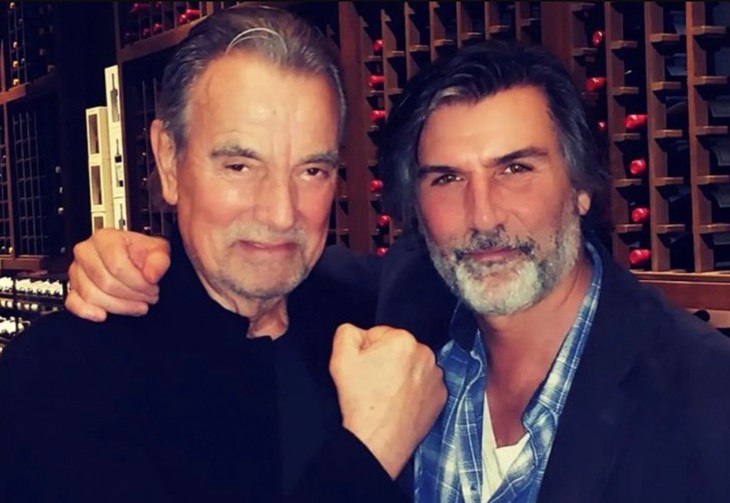 The Young and the Restless (Y&R) spoilers and updates tease that former cast member Vincent Irizarry ran into his former co-star in the daytime drama, Eric Braeden. The actors got reunited at Wally’s after Irizarry’s first air show on the soap back in 2007.

In an Instagram post, Irizarry said that he had an unexpected reunion with a former co-star, Braeden, who’s still playing the role of Victor Newman on The Young and the Restless.

The actor shared a photo with Braeden and wrote, “It was brought to my attention that yesterday was the anniversary of my first air show on Y&R back in 2007 as the deadly gambling addict and swindling husband to Nikki, David Chow.”

“So as fate would have it, it was the perfect time to run into my then-time castmate and on-screen adversary, Mr. Eric Braeden at a favorite Santa Monica wine and dine restaurant, Wally’s,” he continued.

The Young And The Restless  – Sharing The Same Dining Taste

Irizarry revealed that this wasn’t the first time he ran into Braeden in a local restaurant. They’ve known each other for 32 years. It seems like they share the same dining tastes given that they’ve been running into each other at several local spots throughout the years.

Braeden also took to Twitter to talk about his run-in with his former co-star. He said it was good to see Irizarry again. He also said that he’s always respected him as a professional.

Irizarry also took the time to respond to his friend’s tweet and replied that he feels the same way. He also hoped that they could work together again someday.

The Young and the Restless is the second time that Irizarry played opposite Braeden. The actors worked together previously. It was a 1990 TV miniseries titled Lucky/Chances, which was written by Jackie Collins. During that time, Irizarry played the role of Gino Santangelo while Braeden portrayed the character, Dimitri Stanislopolous.

Fans may recall that Irizarry joined daytime drama back in 1983 when he debuted as Lujack on Guiding Light. He left the soap and appeared on Santa Barbara as Scott.

He reprised his role on Guiding Light afterward and then joined the cast of All My Children between 1997 and 2006. He also appeared on Days of Our Lives and The Young and the Restless.

The Young And The Restless Spoilers – Victor Newman Calls Out Adam

In upcoming scenes, Victor Newman (Eric Braeden) will call out Adam Newman (Mark Grossman) for failing to put an end to Billy Abbott’s (Jason Thompson) schemes. Victor will also make his position clear that he wants to be a more active participant at Newman Media. Adam will try to object but Victor will argue that he’s not asking for his approval.