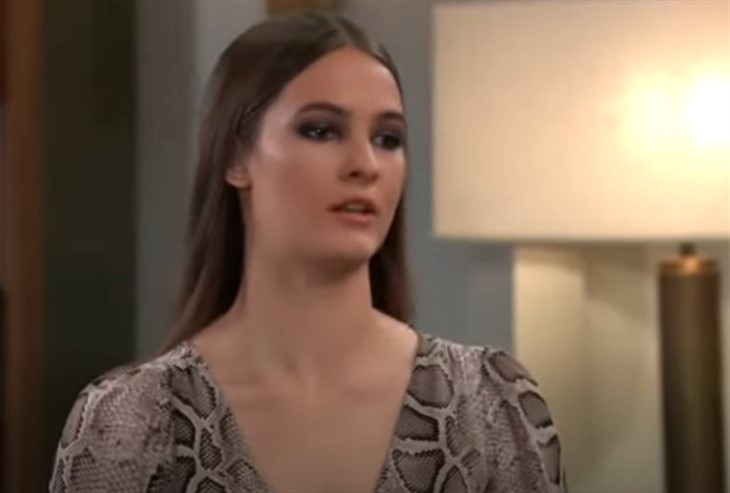 General Hospital (GH) spoilers and rumors tease that Esme Prince (Avery Kristen Pohl) could very well be a daughter that Franco Baldwin (Roger Howarth) never knew he had, and there are several compelling reasons for General Hospital viewers to consider when coming to that conclusion!

General Hospital Spoilers And Rumors – Esme Prince Was Adopted, Someone Broke Up Her Family

General Hospital viewers will recall that Esme has said she was adopted, and someone had broken up her birth family; and she isn’t close to her adoptive family; although for her to attend a private boarding school they must have some money! General Hospital viewers would recall that she had a trust fund but it was cut off – or so she said – by her parents when she ditched her French boarding school and followed Spencer Cassadine (Nicholas Chavez) to Port Charles!

Esme’s parents could be just about anyone who would have a daughter around her age who was given up for adoption, and Esme’s memories about her birth family may be vague. Esme could also be lying about her birth family or if she remembered anything about them at all, considering she could have been given up as a baby. She could have even been adopted through an illegal baby trafficker much like Nelle Benson (Chloe Lanier) was!

Some General Hospital fans are drawing connections between Esme Prince and Franco Baldwin, suggesting storyline hints could be pointing to him as her birth father – her knowledge of Kiki Jerome (Hayley Erin) and calling her “Lauren” for one. Longtime General Hospital viewers will remember that when Franco first came on in Roger Howarth’s iteration, the backstory was that he thought Kiki was his daughter and called her “Lauren” which was her given name. It had turned out that he had dated Ava Jerome Cassadine (Maura West) years ago back in New York, when he was a fledgling artist and she a fledgling art gallery owner.

She had told him that Kiki was his for many years until it came out that she was actually Silas Clay’s, (Michael Easton) Nina Reeves’ (Cynthia Watros) first husband. Longtime General Hospital viewers do have to admit that something about Esme’s crazy reminds them of Heather Webber, (Robin Mattsson) Franco’s birth mother!

General Hospital viewers will have noticed Esme plays mind games and so did Franco, before he had his first brain tumor removed that apparently had caused a lot of his twisted and criminal behavior! One could argue, of course, that some of it could be genetic from Heather; although she is much more manipulative – that sounds more like Esme! Recent strange happenings around Port Charles could also be connected to Esme – especially if she knows Franco was her birth father and is trying to avenge his death somehow, and prevent Elizabeth Baldwin (Rebecca Herbst) from moving on!

General Hospital viewers can imagine if Esme knew how much Franco loved Elizabeth she might think he wouldn’t want her to date anyone else – hence moving her ring from place to place like Franco was haunting her! It would make sense for Esme to hate Ava for hurting Franco as well, and to set fire to his art studio and frame Peter August (Wes Ramsey) for revenge, although it would have been better had she trapped him in it first!