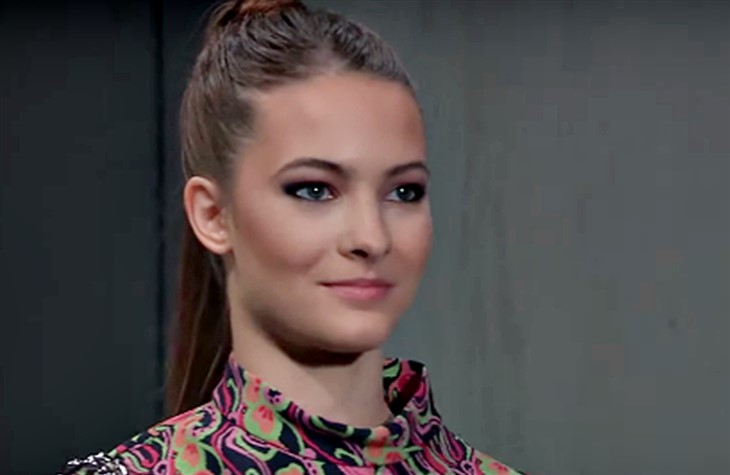 General Hospital (GH) spoilers tease that evil Esme Prince (Avery Kristen Pohl) is out to get some revenge on the other teens in the Port Charles, New York based sudser: Trina Robinson (Sydney Mikayla) Cameron Webber (William Lipton), and Josslyn Jacks (Eden McCoy). Does this have anything to do with those pills she’s been drooling over?

The teens have been looking forward to venturing out to Joss’ stepfather’s cabin in the woods, which is already sounding scary movie ominous. What could go wrong? Sonny Corinthos (Maurice Benard) is kind enough to treat the teens and Esme especially has been pushing for the trip.

Esme wants her boyfriend Spencer Cassadine (Nicholas Chavez) to have one last funsie before he has to spend time in lockdown at Spring Ridge. But Esme is hiding a secret agenda.

Explosive show spoilers reveal that Esme has planned to wreck Josslyn and Cameron’s relationship and throw Trina under the bus at the same time. Somehow she has worked it all out that she will make Joss even more unsure of her romance with Cameron.

Esme is the outsider among the three besties, and she has been throwing daggers at the other girls since day one of her arrival in town to be with Spence, who seems not to realize just what a conniving vixen he has latched onto. Wait a minute, he’s a conniving fox himself!

What goes down at the cabin in the woods? We don’t want to give too much away but we can tell you that Esme wants to play a game, which seems harmless enough.

It sounds like a game of spin the bottle could be proposed, which of course should be shot down instantly, but what could go wrong in the out of the way cabin in the woods?

Those pills are what could go wrong! We can guess that Esme is going to use them to her advantage, perhaps drugging the teens to make them say or do things they otherwise would not. She knows that Joss is insecure about taking her relationship with Cam further and Trina could be the perfect way to make her jealous, at the same time making Spence want to distance himself from her if he thinks she came on to Cam. Aye caramba GH fans, will the teen scene ever be the same again?