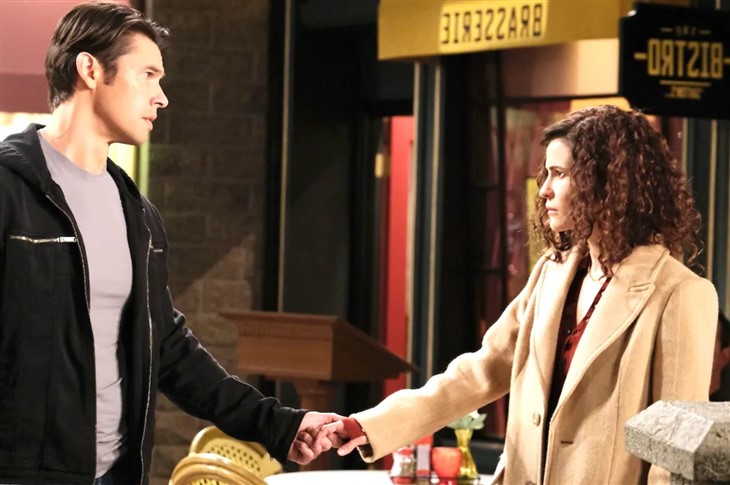 Days of Our Lives spoilers tease that Dr. Sarah Horton (Linsey Godfrey) hasn’t been herself for almost a year! Kristen DiMera (Stacey Haiduk) drugged and kidnapped her the night before she was to marry Xander Cook (Paul Tefler), transporting the young woman in a chest halfway around the world. Sarah went willingly at the time because of the drug that she had been given, but she was almost childlike. Once Kristen got Sarah to the island, Sarah slowly began to improve. But Kristen couldn’t take Sarah home or she would be charged with kidnapping on top of her other crimes.

Days of Our Lives Spoilers – The Diary Of Renee DuMonde!

Since Kristen still had unfinished business in Salem, she gave Sarah something to read to pass the time. The book she selected was the diary of Renee DuMonde (the late Philece Sampler). Somehow, the combination of the drugs and her isolation caused Sarah to believe she actually was Renee. Renee was murdered decades ago, but the was Stefano DiMera’s (the late Joe Mascolo) oldest daughter. She was in love with Tony DiMera (Thaao Penghlis) at the time of her death so when Sarah saw Tony, she jumped in his arms, believing her true love had come to rescue her. As viewers know, Tony is married to Anna DiMera (LeAnn Hunley). Renee’s sworn enemy.

Eventually, Sarah returned to Salem with Tony. She still believed she was Renee, which broke Xander’s heart. The drug that caused Sarah’s delusions was created by Dr. Wilhelm Rolf (William Utay). Rolf agreed to create an antidote and gave it to Chad DiMera (Billy Flynn). The drug was tested and deemed to be safe. But a jealous Gwen Rizczech (Emily O’Brien) swapped the antidote for another dose of the drug. Anna took it upon herself to inject Sarah thinking it was the cure. After the drug made its way through her system, Sarah no longer believed she was someone else. Unfortunately, she believed she was a young child with no memory of her adult life.

Days Of Our Lives Spoilers – Sarah Horton Will Get  The Real Antidote!

Since Sarah had never been given the antidote, Xander realized that it could still work. He convinced Gwen to tell him where the drug was located and soon Sarah will be given the antidote! And at first, it will seem to have worked like a charm. Sarah will remember Xander and even kiss him. But soon Xander will realize all of Sarah memories haven’t returned and she still believes that she and Eric Brady (Greg Vaughn) are parents. But the baby that Sarah believed to be hers was actually Kristen’s little girl. Xander and Victor Kiriakis (John Aniston) switched Sarah’s baby, who died right after childbirth with Kristen’s. Sarah won’t remember any of this and Xander won’t want to tell her, for fear it will cause a setback. Xander and Sarah finally made their way back to each other but now it seems as though Sarah will have to relive that nightmare and this time; she may not forgive Xander so easily!

Will the antidote work on Sarah? Could she finally be herself again? Or will she and Xander have to relive their worst nightmare?