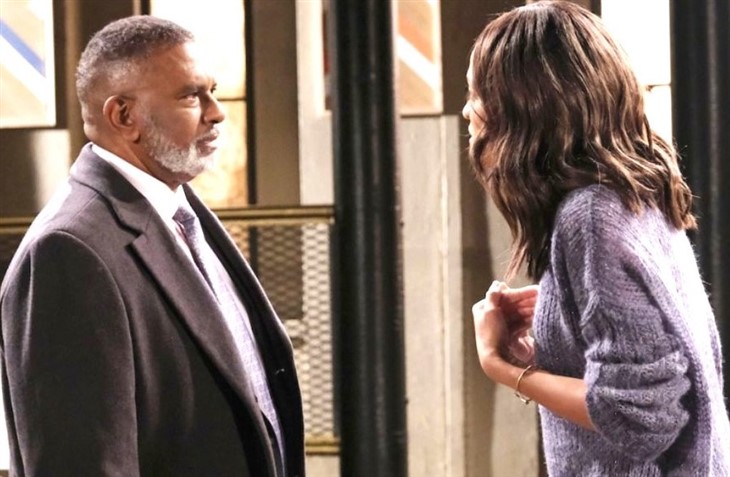 Days of Our Lives spoilers reveal that Eli Grant (Lamon Archey) drops a bombshell on Lani Price-Grant (Sal Stowers). Eli remembers everything that happened before and during the shooting. At first, Lani has a hard time believing it. Then, Lani rushes to Paulina Price’s (Jackee Harry) and walks in on a dangerous situation. It ends with Lani killing her own father.

Days Of Our Lives Spoilers – Eli Grant Remembers Everything

DOOL spoilers reveal that Eli finally woke up from his coma. Lani was overjoyed and relieved that her husband was going to be okay. However, Eli drops a bombshell when he tells Lani that TR Coates (William Christian) is the one who shot him.

At first, Lani doesn’t believe what Eli is saying. Lani even suggests that Eli’s memory is fuzzy, or he is recalling the shooting wrong. That is when Eli insists that he remembers everything perfectly.

Lani’s disbelief quickly turns to fury as she trusted TR. Lani really thought she was going to get to have a relationship with her biological father. Plus, Lani let TR get close to her twin babies.

Meanwhile, there is a dangerous situation unfolding in Paulina’s apartment. TR and Abe Carver (James Reynolds) get into an altercation. Abe always had a bad feeling about TR. During the confrontation at Paulina’s apartment, Abe ends up getting injured. Then, TR turns his rage on Paulina and gets ready to beat her.

Days of Our Lives spoilers for the week of May 9 reveal that Lani tries to reach Paulina by phone. When it goes straight to voicemail, Lani fears the worst. Lani rushes over to Paulina’s apartment and walks in on a horrifying sight. Lani sees an injured Abe and TR ready to beat Paulina.

Speaking to Soap Opera Digest, actress Sal Stowers explained that Lani shoots TR and kills him. As Lani’s mind is reeling over everything that’s happened, Steve “Patch” Johnson (Stephen Nichols) races in the door. Before Lani can say anything, Paulina takes the blame for TR’s death. Stowers told the publication,

“There’s so much going on in Lani’s head. She doesn’t even know if Abe is alive. She can’t get any words out. She’s still in a shocked state and trying to process things and make sense of them. Lani’s trying to figure out everything that happened.”

Even though Paulina takes the blame for TR’s death, Lani will probably confess once she gets over the shock. However, will Lani be cleared of wrongdoing, or could she face legal consequences?

Lani killing TR was done to save both Abe and Paulina. Once Abe regains consciousness, he will be able to verify what happened before Lani walked in. Then, there is Eli’s statement. Even though Lani will probably be cleared, that doesn’t mean her turmoil is over. It is teased that Lani will have a difficult time dealing with taking her own father’s life.