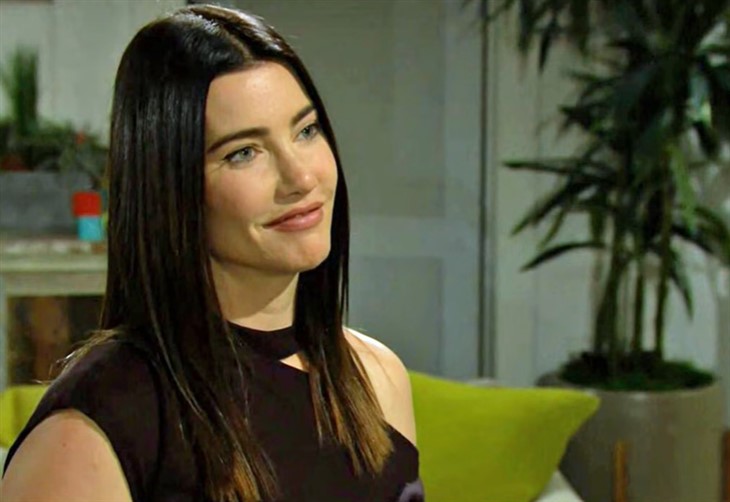 The Bold and the Beautiful (B&B) spoilers reveal that Steffy Forrester Finnegan (Jacqueline MacInnes Wood) will mourn John “Finn” Finnegan (Tanner Novlan). However, she will eventually move on and have another love story. Fans don’t want to see it be Liam Spencer (Scott Clifton). So, who could be Steffy’s next romantic partner?

The Bold And The Beautiful Spoilers – Losing John Finnegan

B&B spoilers reveal that fans were devasted when Sheila Carter (Kimberlin Brown) murdered Finn. Then, Sheila turned the gun on her original target, Steffy. While Finn didn’t make it, Steffy is going to recover. Of course, Steffy will go through a period of mourning. At some point, Steffy will move on and find a new romance.

There are a few viewers who will always believe Steffy and Liam belong together. However, the vast majority don’t want another “Steam” reunion. Some prefer Liam and Hope Logan Spencer (Annika Noelle) together. Then, there are others that want to spare Steffy the agony of dealing with her waffling ex all over again.

Liam bouncing between Steffy and Hope has gone on more times than we can count. Instead of recycling another old, tired love triangle, what will writers do with Steffy’s love life?

The Bold And The Beautiful Spoilers – Bill Spencer Romance Revisited?

The Bold and the Beautiful spoilers reveal that one possible love interest for Steffy could be Bill Spencer (Don Diamont). They have a history together and there are some fans who still talk about “Still” having a lot of chemistry.

Bill doesn’t have anyone in his life at the moment. Brooke Logan Forrester (Katherine Kelly Lang) is unavailable as she is committed to reuniting with Ridge Forrester (Thorsten Kaye). Bill tried to fix his relationship with Katie Logan (Heather Tom). However, Katie is happier without Bill being by her side.

As much as Katie loves Bill, she will no longer be with someone who isn’t 100 percent committed to her. Despite Bill’s repeated claims of love, he always ended up straying.

A while back, Wood mentioned “Still” being a possibility in the future. Speaking to Soaps.com, Wood teased,

“This goes back years to when the characters first hooked up. To this day, we still hear from fans who believe that these two belong together.”

“Steffy is the one person who can tame him. She’s able to push him in a way that not a lot of people can or do. They’re afraid of him, and he always has a wall up. And she can often be the same way, so when they’re together you see another side to each of the characters. When you look at them in that context, they do seem like a perfect match.”

Jenna Duggar Moves On from ‘Counting On,’ Earns 6-Figure Payday