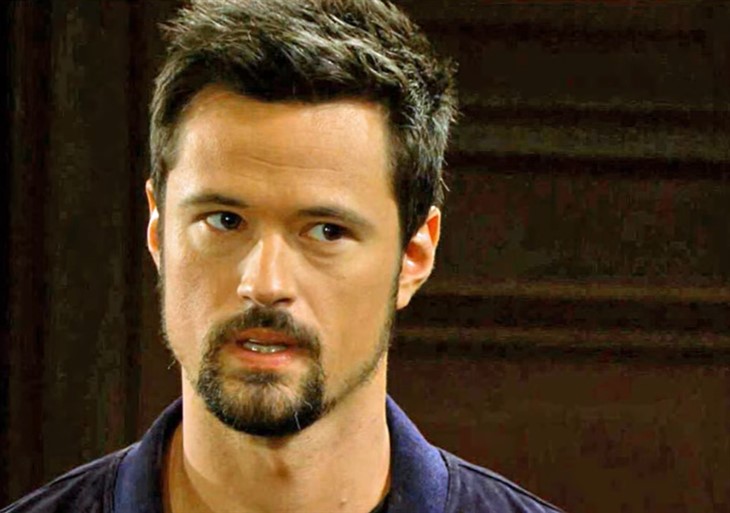 Viewers of The Bold and The Beautiful will remember that Sheila, bragging about how Thomas should thank her for Ridge Forrester’s (Thorsten Kaye) and Taylor Hayes’ (Krista Allen) reunion, opened up a huge can of worms for herself in the process! Viewers of The Bold and The Beautiful will recall that Thomas kept pressuring her for more details as to how she was involved in Brooke Forrester’s (Katherine Kelly Lang) breaking her sobriety, and she finally admitted she’d switched the labels between a non-alcoholic and an alcoholic champagne bottle.

In doing so, Sheila has to keep an increasingly guilty and torn Thomas from telling anyone else, expecting him to keep the secret forever – the one thing that’s keeping him quiet is the possibility of his father feeling sorry for Brooke. Thomas fears if Ridge knew what really happened, he would see Brooke as a victim, and he knows that she’d play it to the hilt to get him back from Taylor!

Viewers of The Bold and The Beautiful know there are several reasons that Sheila has to make sure Thomas keeps his guilty and torn trap shut; she needs to make sure Brooke remains miserable, for one. Viewers of The Bold and The Beautiful will recall that the whole reason for this plot of Sheila’s was to keep Brooke from making good on her promise to have Ridge ensure Sheila would never, ever, ever see or visit her son or her grandson again!

Sheila, thanks to Taylor, who she didn’t realize was psychoanalyzing her at the family Christmas she invited her to, where she was able to spend time with Dr. John “Finn” Finnegan (Tanner Novlan) and baby Hayes Finnegan (Piper Harriot) couldn’t let Brooke ruin her “in” with her family. Breaking up Brooke and Ridge was the most effective way to keep that from happening, and making sure she fell off the sobriety wagon was a big part of that, although it wouldn’t have necessarily broken them up.

The Bold And The Beautiful Spoilers – Thomas Forrester Will Continue To Wrestle With His Guilt, And That Means Danger!

Viewers of The Bold and The Beautiful can expect that Thomas will continue to wrestle with his guilt, and that means danger ahead for Thomas if he cannot keep Sheila’s confessions to himself! Viewers of The Bold and The Beautiful can also imagine that if Sheila spends very much time with Thomas at all, she’s going to pick up on it and she’s going to worry her secret is not as safe with him as she wants it to be! One option would be just to make Thomas disappear for good- and her secret with him – but she would have to do so in a way not to draw suspicion to herself.

Plus, it is doubtful that the Bold and Beautiful writers would go there, considering redeemed Thomas is becoming a more popular character and Sheila likes Taylor and doesn’t want her to experience grief. The far better option might be for Sheila to kidnap Thomas, although that certainly wouldn’t be a permanent solution – however, it would buy her time until she figures out something else and maybe Thomas would be more motivated to keep the secrets!

Days Of Our Lives spoilers – Eli Will Have Reservations About His Future As A Cop!