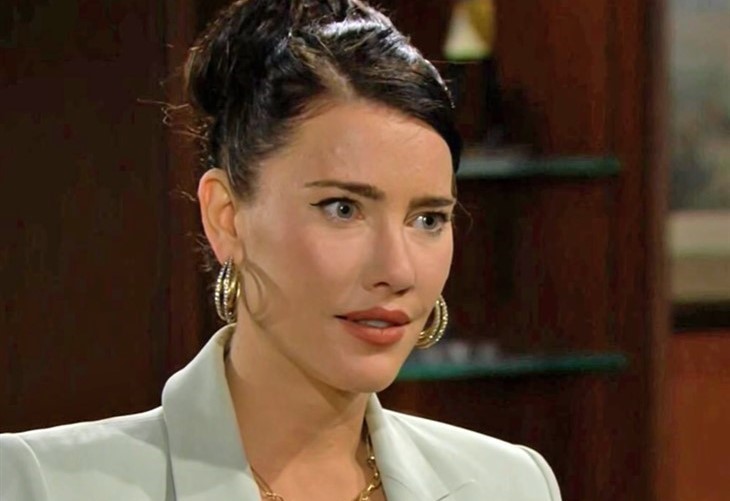 The Bold and the Beautiful spoilers document that Steffy Forrester Finnegan (Jacqueline MacInnes Wood) was transfixed by the lunatic who was standing in front of her. Sheila Carter (Kimberlin Brown) was the woman who shot Taylor Hayes (as then played by Hunter Tylo), which led to her leaving town all those years ago.

Steffy witnessed Sheila gun her husband down with a bullet that was intended to silence Wood’s character forever. Steffy reacted with normal instinct when pulling out her smartphone and dialing 911.

But Sheila could not allow her daughter-in-law and the mother of her grandson, Hayes Forrester Finnegan (Samantha Worden and Piper Harriet), to call for help. No, Sheila needed to cover her crime. So, she pulled the trigger again and believed that Steffy was also shot dead.

The Bold And The Beautiful Spoilers – Steffy Forrester Finnegan Lives

Teasers indicate that Steffy will make slow but steady progress. Sheila’s aim was terrible, even though she stood at point-blank range to Steffy’s head.

Wood is set to deliver her third child this spring. So, advanced scenes likely were and or are being recorded that will allow Steffy to be sporadically seen during an extended recovery period.

Years of going back and forth to Liam Spencer (Scott Clifton) were ended by the appearance of John Finn Finnegan (Tanner Novlan) at the foot of Steffy’s bed. Devoted viewers recall that Steffy was badly injured in what was her second major motorcycle accident.

Finn was assigned to her case, with Steffy’s first glimpse of him being a daytime-worthy event. A magic sparkle appeared on the screen when their eyes met. Yes, it was love at first sight.

Steffy and Finn went on to have Hayes and marry. But their idyllic life was shattered through the shockingly ominous reappearance of Sheila, who had not been seen in Los Angeles, California, in a few years.

Seeing Steffy regain full health will envelop the Forrester family and Steffy’s other loved ones in the days ahead. Along with that, everyone will want whoever committed these crimes to be caught and punished.

So, Sheila’s cover-up means that she is either living on borrowed time until her arrest or will skip town, as viewers have seen before.

Will TPTB allow Sheila to avoid justice in this specific instance? That would be an impossibly soapy pill for the audience to swallow unless Sheila takes off as part of an eventual comeback storyline or reappearance in Genoa City, Wisconsin, on The Young and the Restless.