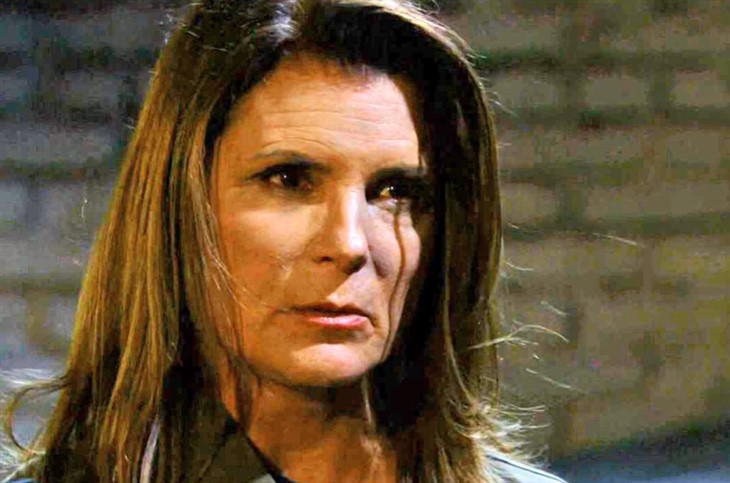 Viewers of The Bold and The Beautiful will recall that Deacon Sharpe (Sean Kanan) told Sheila that Steffy lived when he came to her hotel room to give her the terrible news that he had found her and John “Finn” Finnegan (Tanner Novlan) shot in the alley. Viewers of The Bold and The Beautiful know that Sheila already knew all about it – she was aiming for Steffy and Finn jumped in front of her and took a fatal bullet, and then she shot Steffy.

She took their belongings and stuffed them into a trash bag from the trash can in her hotel room and threw them away somewhere; she was grief stricken that she’d shot and killed her own son but there was no reason for her to go to the hospital. She didn’t have to identify his body because Deacon already did, and she didn’t go to the hospital to “support” the Forresters until she heard Steffy was alive, and she and her “friend” Taylor Hayes (Krista Allen) fell into each other’s arms and cried and hugged each other! Longtime viewers know this does not bode well for Steffy!

Viewers of The Bold and The Beautiful know that now, since she went to the hospital and found where the Forrester family was gathered near Steffy’s room, which should have been in the intensive care unit, Sheila knows which room Steffy is in and she’s on life support! Usually, as viewers of The Bold and The Beautiful who have ever visited someone in an intensive care unit, only close family members are allowed even in the area of the patient, and usually only next of kin allowed in the room!

It is surprising that Sheila was not told to wait in a waiting room instead of being allowed in where the family was gathered, but then with all her surprise visits to both Taylor and Finn in their offices at the hospital she is probably known to hospital staff. Her son Finn is in the morgue – although Steffy would be considered her daughter in law, usually there is gossip in a hospital and people would know they’re not close!

Viewers of The Bold and The Beautiful know that Sheila, trained as a nurse, knows her way around a hospital and all she’d have to do in order to get into Steffy’s room is steal some scrubs, an ID badge, mask and surgical cap! Sheila could add a face shield to that to further disguise herself, since with covid precautions and a patient in grave condition she may be extra careful in order to “protect the patient” although Dr. Bridget Forrester (Ashley Jones) and the nurses attending to Steffy didn’t.

Sheila doesn’t want to be too conspicuous but yet she would want to be fully disguised – she may come in on the night shift, and easily access Steffy’s room and disconnect her life support – which could be easily done by “accidentally” unplugging an electrical cord with her foot! Viewers of The Bold and The Beautiful know that Sheila has to do something to keep Steffy from telling what happened, and she needs to do it quickly!