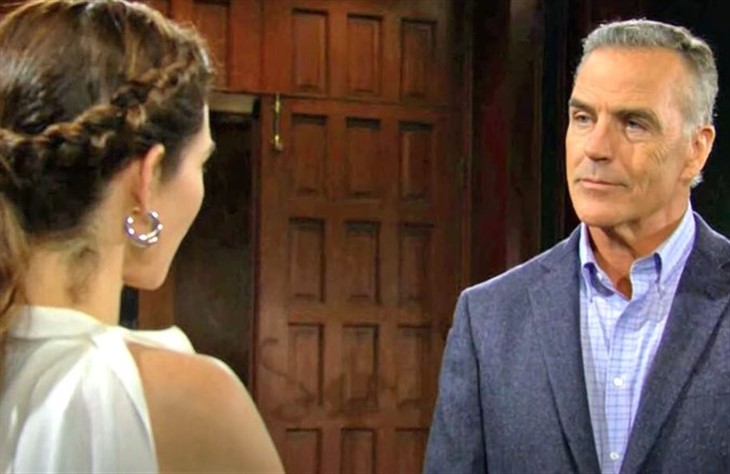 The Young and the Restless (Y&R) spoilers document that Ashland Locke (Richard Burgi) is having an increasingly hard time remaining optimistic. His condition is worsening, though outward signs do not support that belief.

Fans heard Ashland tell Nate Hastings (Sean Dominic) that he did not want to waste more time with his current doctor. That medical professional apparently was not open to the aggressive, experimental treatment options Ashland is interested in pursuing.

Victoria Newman Locke (Amelia Heinle) is the force who convinced Ashland to seek any form of treatment. So, she is backing all avenues that can be explored. But the sound of Ashland’s longevity clock is ticking more loudly.

The Young And The Restless Spoilers – How Much Time Is Left?

The subject header is a subjective question. Dialogue in the recent past implied that Ashland had approximately six months left. That indicated Burgi’s character could be gone by the end of this calendar year.

A remission is always an option. That would not ensure Ashland’s permanent survival but would add extra months or years onto his lifespan.

The referenced Peruvian option could mean that a radical treatment yields a dramatic cure. That outcome would be very soapy and hard to believe if it happens.

No one will ever know if Victoria and Ashland would have fallen so hard for each other and then quickly married if the cancer diagnosis was not in play.

Victoria certainly gave Ashland extreme benefit of the doubt regarding his strange backstory. Nick Newman (Joshua Morrow) found the details to be unbelievable, which sent him on a fateful trip to Toms River, New Jersey.

Victoria was not impressed by what her brother learned and relayed. Instead, she rebuked Nick for his efforts.

The Young And The Restless Spoilers – Billy Abbott And Jesse Gaines Are Distractions?

Billy Abbott (Jason Thompson) was not initially sure that Ashland was telling the truth about having cancer. He eventually decided the claim was true but compartmentalized his sympathy beneath a relentless need to expose Ashland’s backstory.

Jesse Gaines (Jamison Jones) retains his wild card status. He appears to be working for Victor Newman (Eric Braeden) as bait for Billy.

But there is no way of knowing what could come from the plan that the Moustache, Adam Newman (Mark Grossman), and Ashland are implementing. Victoria’s awareness of that development and the stress involving Billy’s incessant efforts to bring Ashland down would seem to have some negative impact on his fragile health.

Regardless of all outside factors, if Ashland lives he will give Victoria credit. Her love and insistence that he fight the disease change his mind and could prove to be the factor in saving his life as well.