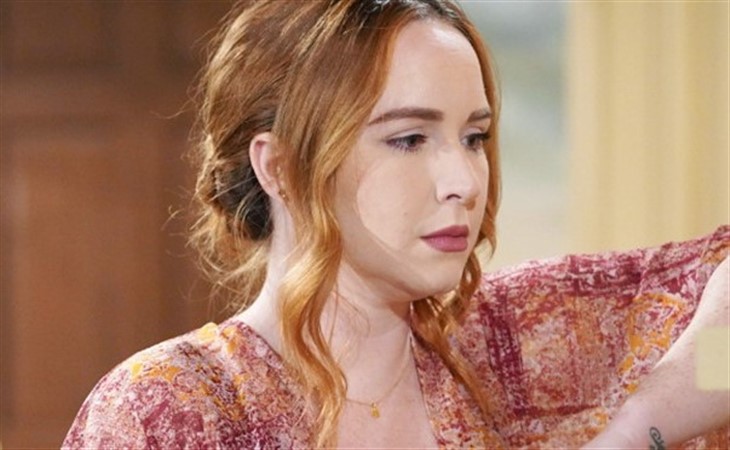 The Young and the Restless spoilers reveal that Mariah Copeland (Camryn Grimes) believes that the baby belongs with her. As Abby Newman-Abbott-Chancellor (Melissa Ordway) spirals during her grief, Mariah could make a shocking legal decision. Abby might be forced to battle to keep her baby while also mourning her husband’s death.

Y&R spoilers reveal that Abby is in denial about Chance’s death right now. However, it is just the first stage of grief. Mourning the loss of a loved one has many stages and eventually, Abby will go through them all.

In the meantime, Victor Newman (Eric Braeden) is taking action to help Abby. First, he called Sharon Rosales (Sharon Case) to try and talk to Abby. Then, he asked Nate Hastings (Sean Dominic) to stop by and prescribe a low-dose anti-anxiety medication so Abby would sleep.

Ever since Mariah gave birth to Abby’s baby, she has not been able to sever the connection. Mariah might never be able to let go of the strong bond she feels for the child, and is struggling with that. As Abby goes through the grieving process, she will continue to spiral downward. Mariah will take note of this and could take drastic action.

The Young And The Restless Spoilers – Shocking Legal Battle

The Young and the Restless spoilers reveal that Mariah confessed to Tessa Porter (Cait Fairbanks) that she believes that the baby is meant to be with her. However, legal documents were signed making it clear that Mariah was only the surrogate and the baby belongs to Abby and Chance Chancellor (formerly Donny Boaz).

However, a court might be willing to listen to the case if there are concerns about Abby’s ability to take care of the baby. If Mariah goes this route, then she will certainly stun everyone in Genoa City. It could also cause the breakdown of her relationship with Tessa. As much as Tessa loves Mariah, she will not agree with her trying to take Abby’s baby.

While Mariah keeps bringing up all the reasons why she is a better mother for the baby than Abby, Devon Hamilton (Bryton James) is on the opposite side of the fence. Devon keeps telling Mariah that the baby is just fine with Abby. Sharon told Devon that the baby could give Abby a reason to keep living. Meanwhile, Tessa made it clear to Mariah that Abby would never neglect or abuse the baby. Plus, Abby has a huge network of family and friends to help her.

Would Mariah really go this far? After Mariah was rescued from her hostage situation, it was made clear that the storyline would have a ripple effect. In fact, it was teased that Mariah would make shocking decisions and her mental state would get worse. Plus, Fairbanks hinted that it might mean the end of Mariah and Tessa’s relationship.

We really haven’t seen the bombshell moment that has been teased. So, that means there is something coming up ahead with Mariah that will directly impact Abby and the baby. How will Abby deal with this shocking betrayal and what will a judge decide?