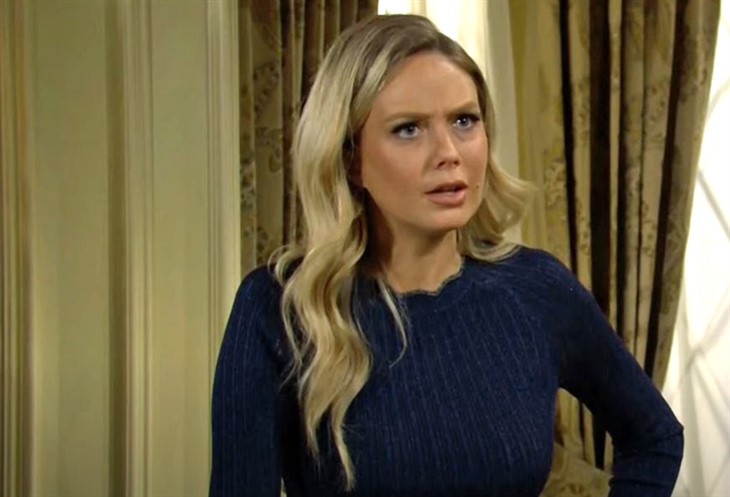 The Young and The Restless (Y&R) spoilers and updates reveals when Abby sleeps through the baby crying, it causes alarm bells for Devon. As she continues to deal with the aftermath of her husband’s alleged death Abby’s mental status may decline, and she could be headed for serious trouble.

Abby Newman Chancellor (Melissa Ordway) has been displaying disturbing behavior ever since she received the news that her husband Chance Chancellor (possibly Conner Floyd) died in an explosion. Spoilers say things are going to get worse as a result of the medication she was prescribed for anxiety. Her loved ones are worried because Abby wants to search for her husband without giving any thought to what will happen to her baby. Mariah Copeland (Cameron Grimes) was so disturbed by Abby’s irrational behavior that she offered to move back into the mansion and watch Dominic.

Devon Hamilton (Bryton James) will soon express his concerns about Dominic Newman-Abbott-Chancellor. Devon does not think it is healthy for the baby to remain in a house that currently has so much emotional turmoil going on. Spoilers suggest that he may consult with Nina Webster (Tricia Cast) to find out what she thinks about the situation. Devon will eventually discuss his concerns with Abby, who, after a troubling experience, will begin to understand why he is so worried.

The Young And The Restless Spoilers – Abby Newman Neglects Dominic

Spoilers say that Abby will be fast asleep as her child is crying and will not hear him in part because of the pills she is taking. She might also be exhausted because of all she has been through. Abby will become worried that she cannot properly take care of her son right now, which will bring up the question of who will help her out. Initially, Mariah and Tessa were living in the home with Abby but due to separation anxiety and postpartum depression Tessa and Mariah moved out.

Y&R Spoilers – Chance Chancellor Might Return To A Mess

Nina and or Ashley might attempt to assist with their grandson or Devon might feel as that as the bio dad and godfather that he has some rights where Dominic is concerned. Spoiler tease that there is a possibility that Abby might become addicted to her prescription medication which would only complicate the situation. If Chance is alive and does return to Genoa City, he might find his wife in peril.