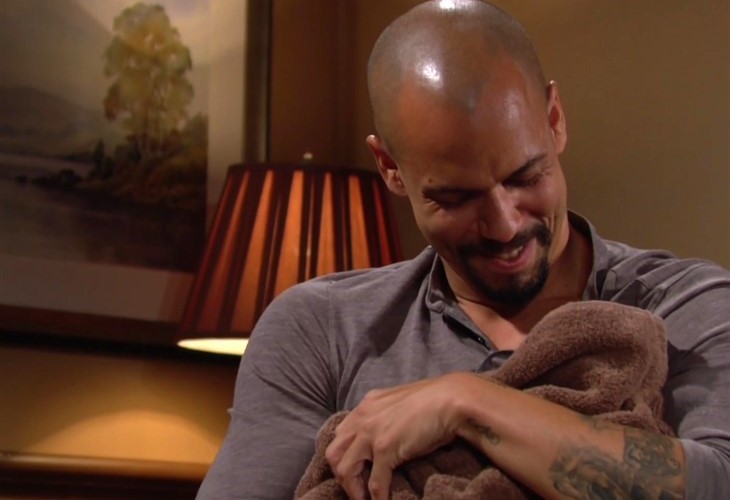 The Young and the Restless spoilers document that Devon Hamilton (Bryton James) is so troubled by Abby Newman Abbott Chancellor’s (Melissa Ordway) behavior that he is taking action. Dominic Newman Abbott Chancellor (no baby actor known to be cast for this role) will be staying with him. So, does that decision cross the daddy line?

Devon is not technically Dominic’s father. He is the newborn boy’s father. Anyone in Genoa City, Wisconsin, can play word games if they like to avoid the truth. But Devon’s selflessness, along with Mariah Copeland’s (Camryn Grimes), led to Dominic’s birth.

Chance Chancellor (recast anticipated to be Connor Floyd) was on board with the donor and surrogate plan before he left on assignment. Chance is not Dominic’s genetic father. And he is never known to have filed any legal paperwork that would have made him Dominic’s adoptive dad.

Abby is stricken. News of Chance’s death caused her to enter the stages of grief, as Nina Webster (Tricia Cast) said.

This stunner does not seem believable because Chance was so fearless. Hardcore fans recall him descending from the ceiling at The Grand Phoenix hotel. That was when he and Abby first connected.

Chance survived a shooting, where Adam Newman (Mark Grossman) was the intended target. But the mission in Spain is currently believed to have led to his demise.

Christine Williams (Lauralee Bell) says that the evidence is overwhelming. While she was not able to convince Abby that Chance was likely dead, a series of conversations with loved ones made a deep impact.

Devon told Nick that Abby fell apart after she appeared to realize that her husband was never coming home again. The authorities are conducting an extensive search at the scene of the explosion that was intended to take him out.

But teasers indicate that Floyd is the Chance recast. So, assuming that is true, then a survival reveal is approaching.

The Young And The Restless Spoilers – Mariah Copeland Angered By Development

Mariah was suffering what seemed to be post-traumatic stress disorder after the kidnapping. Grimes’ character felt compelled to move out of the mansion a handful of weeks ago because she could not handle being around Dominic. Abby later decided that it would be best to limit Mariah’s contact with the baby.

Now, with Devon taking Dominic to his penthouse, Mariah feels naturally angered. Why should Devon have access to Dominic and not her?

Teaser scenes show Abby and a bottle of prescription medicine. That does not necessarily mean she will abuse the meds or become addicted. But her mind will not clear soon, which will heighten Devon and Mariah’s protective instincts.

Days Of Our Lives Spoilers: Sami Calls EJ, Will He Brag About Bedding Nicole?