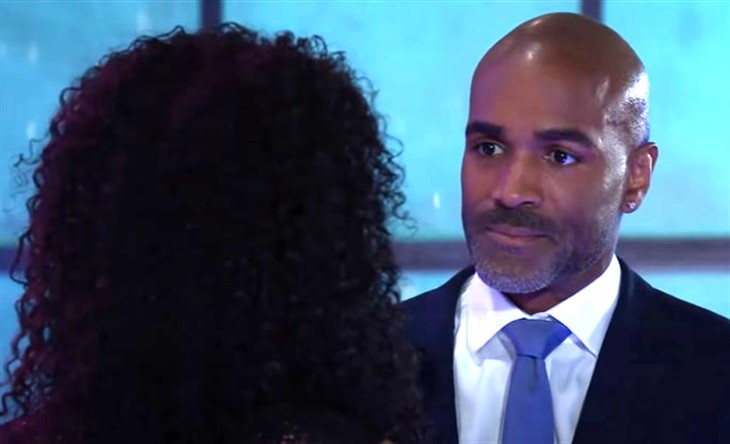 General Hospital (GH) spoilers and updates tease Curtis Ashford (Donnell Turner) has had a shock. Curtis has found out that his father Marshall Ashford (Robert Gossett) is alive. Curtis has been trying to find out about a mysterious man that was asking questions about him. Curtis was getting help trying to find the mystery man from Dr. Portia Robinson (Brook Kerr).

Portia has wanted to help Curtis to get the information that he needed and got Elizabeth Webber Baldwin (Rebecca Herbst) to help her draw a picture of the mystery man. Portia has been dealing with her own concerns about her daughter Trina Robinson (Sydney Mikayla). Curtis and Portia will need to come together to find a way to keep their families from danger.

Curtis has not had Marshall in his life ever since he was a child. Curtis and his family believed that Marshall died of a heart attack. Curtis was raised by his aunt Stella Henry (Vernee Watson) with his brother Thomas Ashford (no actor’s name known for this important role). Curtis has been concerned about his nephew Dr. TJ Ashford (Tajh Bellow) because he had an encounter with Marshall at the hospital. Curtis is trying to accept that Marshall is alive. Marshall has told Curtis that he could not come back into his life because it was not safe. Marshall may have enemies that could cause trouble for Curtis and his loved ones in some way in the future. Curtis will need to find a way to keep the ones that he cares about safe from harm.

Portia has been concerned about Trina being a friend to Spencer Cassadine (Nicholas Chavez). Spencer has been having trouble with his father Nikolas Cassadine (Marcus Coloma) and his wife Ava Jerome-Cassadine. Spencer (Maura West) has had problems with the law because he was stalking Nikolas and Ava. Portia believes that Spencer could get Trina into danger. Portia is concerned about Nikolas because he is a Cassadine and his family has many problems with the law. Portia has met Spencer’s girlfriend Esme Prince (Avery Kristen Pohl). Portia advised Trina to keep her distance from Esme. Trina is determined to try to help Spencer with his problems. Portia does not want Trina to be hurt because of she is trying to be a friend to Spencer.

General Hospital Portia and Curtis have been getting closer as a couple. Curtis has been able to rely on Portia to help him to deal with the problems that he has been facing. Curtis is going to want to make sure that Marshall can be trusted before he can get close to him. Will Curtis find out that Marshall has his best interest at heart or is not to be trusted?

Curtis will want to make sure that the ones that he cares about are not put into danger. Will Curtis find that he wants to help Marshall and keep those he loves safe? Portia is determined to make sure that Trina gets to have a bright future. Will Portia be able to make sure that Trina does not do anything to put herself into danger? Portia can trust that Curtis will help her to keep Trina safe. Will Curtis and Portia continue to get closer as they face the dangers to themselves and the ones that they love? Be sure to catch up on everything happening with GH right now. Come back here often for General Hospital spoilers, news, and updates.