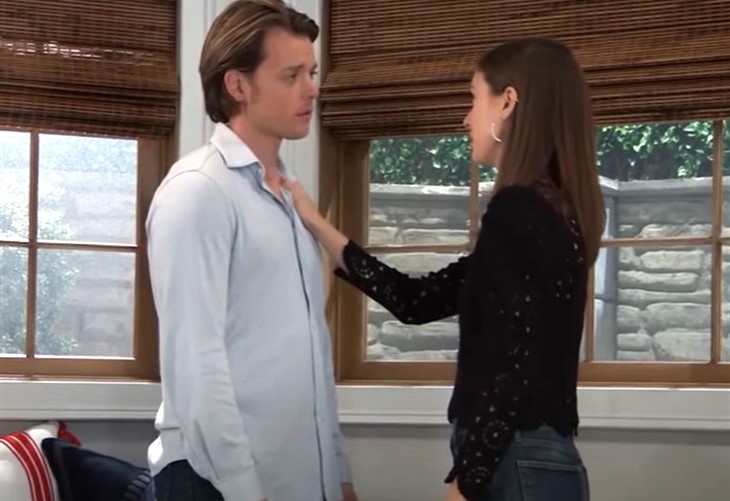 General Hospital Spoilers tease that Willow Tait (Katelyn MacMullen) will soon face anger from Michael Corinthos (Chad Duell). As viewers know, Willow was out with Wiley Corinthos (Caleb & Kyler Ends) when they bumped into Wiley’s grandmother, Nina Reeves (Cynthia Watros). Wiley saw Nina and wanted to see his grandmother, and even though Willow and Michael had agreed that for now Nina shouldn’t spend time with Wiley, Willow felt she had no choice once Wiley saw Nina and wanted to see her. If she had dragged Wiley away from Nina, Wiley would certainly have been upset and confused.

Rather than drag the young boy away from his grandmother, Willow allowed Nina to visit with Wiley. Once they were alone, Willow made it clear that she didn’t approve of the things that Nina had done. She just didn’t want to make Wiley suffer because of Nina’s actions. Of course, Wiley’s other grandmother, Carly Corinthos (Laura Wright) arrived just in time to see Nina telling Wiley goodbye.

GH Spoilers – Carly Corinthos Will Make It Clear She Is Unhappy With Willow Tait!

Carly is understandably upset with Nina for keeping Sonny Corinthos (Maurice Bernard) away from his family for months. Sonny had amnesia but Nina knew where he was almost the entire time. So look for her to lay into Willow for allowing Nina to see their common grandson. Willow will stand up for herself. The meeting wasn’t pre-arranged but there will be no talking to Carly who will likely already have her mind made. She will certainly tell Michael all about it, assuming Willow doesn’t tell him first.

Michael will struggle to understand Willow’s actions once he finds out about the visit. Again, Willow will likely have to explain the situation. While she agrees that Nina shouldn’t see Wiley, no one planned the outing. It all happened by chance. Michael will certainly be more understanding than Carly, but this may be the first of many more issues between Willow and Michael over Wiley’s care. And Carly will certainly make her opinion known to all.

Will Carly blame Willow for Wiley’s visit with Nina? Will Willow be able to stick up for herself? And how will Michael react once he hears about it? Anything can happen in Port Charles so stay tuned to General Hospital airing weekdays on ABC. And don’t forget to check back right here regularly for all your General Hospital news, information and spoilers!