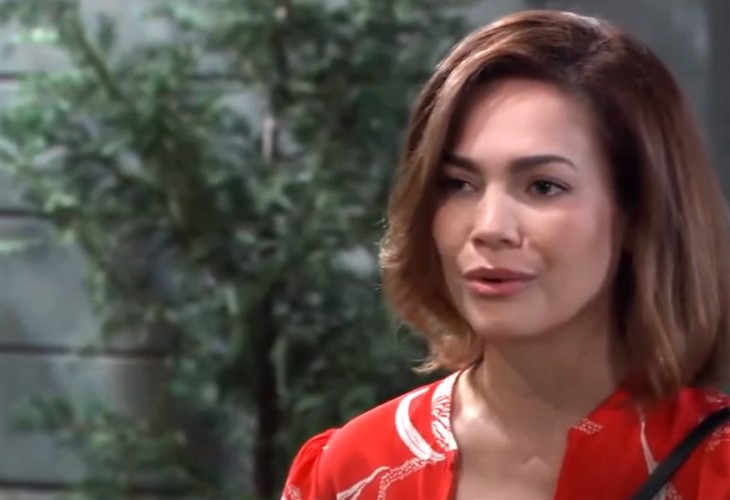 General Hospital spoilers tease that Elizabeth Baldwin (Rebecca Herbst) will be concerned for her son Cameron Webber (William Lipton) when she hears of Esme Prince’s (Avery Kristen Pohl) stunts in an upcoming episode of General Hospital!

General Hospital viewers will see that as predicted, Esme caused trouble at the Photo Ark exhibit that was Trina Robinson’s (Sydney Mikayla) big night! General Hospital viewers will recall that Esme slyly told Spencer Cassadine (Nicholas Chavez) that she hoped Trina would have a night she would never forget, and it sounded like Esme may have done something to make sure that she would!

Esme had a rather wicked little smile as she told Spencer that, and that wasn’t the only thing. Esme made a very big deal about Josslyn Jacks (Eden McCoy) not being present as they witnessed Cameron and Trina talking together, and she tried to insinuate to Spencer that there was something untoward going on between the two of them. Spencer told her she was reading it wrong. Esme’s insane jealousy had pushed her earlier to confront Trina about not trying to steal her boyfriend, so it was plain that she was trying to get a reaction out of Spencer with that remark!

General Hospital viewers will recall that Esme has been taunting Cameron over some very personal things, and putting the peer pressure on both him and Josslyn to go through a certain right of passage-together. General Hospital viewers saw Cameron be a perfect gentleman and let Joss call the shots, even though she wasn’t as ready as she thought she was to call those particular shots! Cameron will tell Elizabeth some things about Esme, but the real Esme tea will come from Portia Robinson (Brook Kerr)!

After the Photo Ark exhibit closes, Portia will warn Elizabeth about Esme and that she probably should keep a real close eye on Cameron, considering the trouble she has caused for Trina and the spell she’s seemed to have over Spencer! Portia saw Esme’s behavior around the other teens at the exhibit and pegged her right away as a troublemaker – and had told Trina to watch her back! Cameron has too much of a tendency to be Mr. Nice Guy and Esme would run him over like a bulldozer!

General Hospital viewers know that even though it’s not supposed to, gossip often flows through the halls of General Hospital – two particular nurses both with the name of Amy have been famous for it! Elizabeth hears through the grapevine that Esme has taken a particular interest in Ryan Chamberlain (Jon Lindstrom) at Spring Ridge, and also that she managed to duplicate Kiki Jerome’s (Hayley Erin) work badge and leave it at the scene of Ava Cassadine’s (Maura West) burned out car! Elizabeth tells the security team at work to watch for Esme at the hospital, warns Cameron to be wary, and even places a call to Nikolas Cassadine (Marcus Coloma) to not trust her around Spencer! True, Elizabeth is a bit out of the loop where Nikolas and Spencer’s relationship is concerned but she feels she must talk to him about her and others’ bad feelings about Esme anyway!