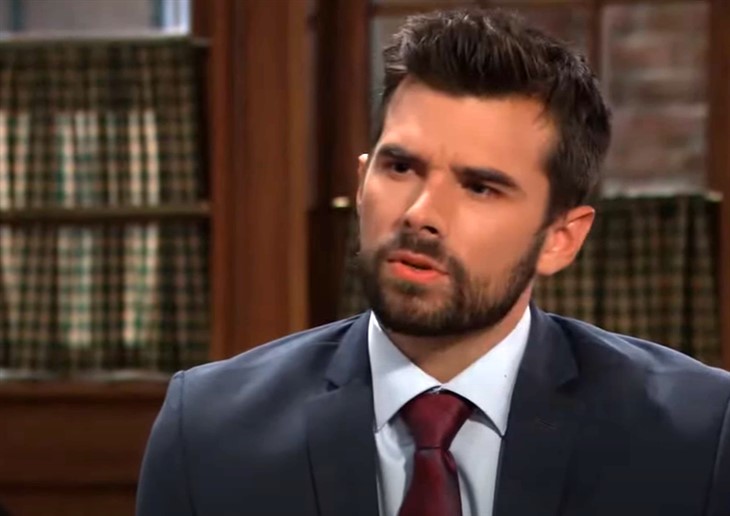 General Hospital viewers will recall that Chase was putting the pieces of the puzzle together and got a great big lead when he ran into Bobbie Spencer (Jacklyn Zeman) in a recent episode of General Hospital! Chase was picking up some food he’d ordered when he ran into Bobbie, and his phone went off with a text about Brook Lynn’s whereabouts on the night she had earlier claimed to him that she went to Brooklyn, New York and arranged for a doula to come to her hotel room to deliver “Bailey Lois Quartermaine” (Harper and Scarlett Bloom).

The text had said she’d gone to Beecher’s Corners, and Bobbie hears him say the name of the town. She mentioned she had been there around Memorial Day – which is when “Bailey” was born. Bobbie explains that she had been going to meet Maxie and deliver her baby in Beecher’s Corners, to throw Peter August (Wes Ramsey) off the trail, then Maxie had a plan that Bobbie didn’t know too much about in order to keep Louise August (Harper and Scarlett Bloom) safe from that point.

General Hospital viewers will recall that Brook Lynn lied about her pregnancy and her “baby’s” paternity to both Chase and Valentin Cassadine (James Patrick Stuart) and they both found out about the same time! Once Chase has that eureka moment after talking to Bobbie, he remembers Brook Lynn’s narrative about the night of “Bailey’s” birth and realizes that “Bailey” and Louise are one in the same! He immediately hunts down Brook Lynn and walks in on her having devastated Valentin just as he figured out that he wasn’t the father.

General Hospital viewers know that Valentin hasn’t figured out that “Bailey” is Louise, but he has figured out that he isn’t her birth father and that Brook Lynn had scammed him with the baby over ELQ stock! As Valentin is tearing into Brook Lynn over her deception, Chase walks in and announces that he is “Bailey’s” birth father! Chase, with his police background, likely doesn’t trust Valentin with the truth that “Bailey” is Louise – after all, he’s been a little out of the loop lately regarding Valentin’s hatred for Peter. They haven’t been friends since the double wedding of Maxie and Peter and Chase’s brother Dr. Hamilton Finn (Michael Easton) and Anna Devane (Finola Hughes) fell apart!

General Hospital Spoilers – Detective Harrison Chase Stepped Up To Protect The Baby, But “Mama’s” Got A Lot Of Explaining To Do

General Hospital viewers know that while Chase stepped up to protect the baby, “Mama’s” still got a lot of explaining to do! General Hospital viewers will see over the next several episodes that as Brook Lynn is eternally grateful for Chase stepping into that conversation, especially since Valentin in his grief could have been taken as threatening her life, there are some parts of the plan that Chase will reveal to her that will be worrisome to her. These certain parts of Chase’s plan will definitely not present Brook Lynn in the most flattering way!