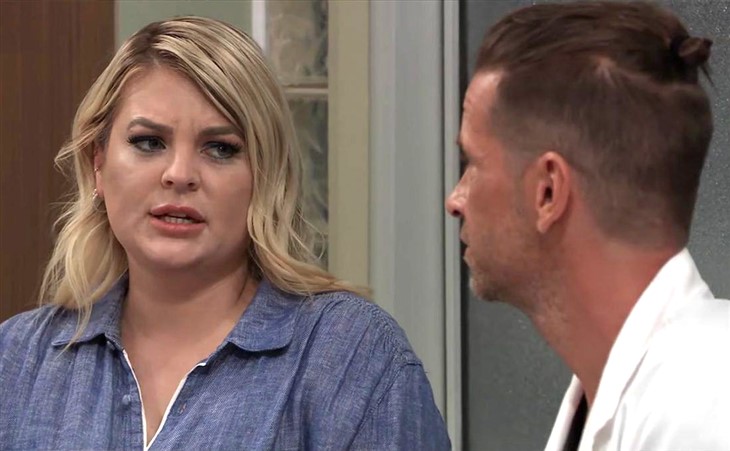 General Hospital (GH) spoilers tease that Maxie Jones (Kirsten Storms) has slowly been getting closer to Dr. Austin Gatlin-Holt (Roger Howarth). The two met under the most stressful of conditions. A pregnant Maxie was lost and lone in the woods and to make matters worse, she was in labor. Austin, who just happened to be hiking in the area, arrived just in time to deliver Maxie’s baby. Not long after, Austin joined the staff at General Hospital and he has grown fond on Maxie, and vice-versa. But Austin doesn’t know the entire truth about what happened that night, and when he finds out, his reaction is anyone’s guess.

Right after Maxie gave birth, Austin handed Maxie her baby. Then he was knocked out from behind by the nurse who was to deliver both Maxie and the baby to Peter August (Wes Ramsey). Maxie found the strength to run from he would-be captor and led her to a mine shaft where the nurse fell to her death. Maxie then contacted Brook Lynn Quartermaine (Amanda Setton). Once Brook Lynn arrived, Maxie gave her the baby to keep safe from Peter. Maxie then told everyone that the nurse absconded with the baby. Austin woke up not long after seemingly with no knowledge of what happened while he was out.

GH Spoilers – Maxie Jones Has Been Separated From Her Baby For Months!

Although Brook Lynn has been taking great care of her baby, Maxie still longs to be reunited with her daughter. And she feels more and more guilty each day the closer she gets to Austin. For his part, Austin seems to have heard bits and pieces of Maxie and Brook Lynn’s exchange, although he seems to still be in the dark about the details. As their plan grows more and more complicated, Maxie will come closer to revealing the truth.

To make matters even more complicated, Austin is actually a Quartermaine. He and Brook Lynn have many issues between them. So if Austin remembers what really happened, or if Maxie decides to tell him, Austin will have to make a choice. Will he stay loyal to Maxie or get revenge on Brook Lynn? And once he discovers that Maxie has been lying all this time, will his feelings for her change?

Should Maxie tell Austin the truth? Or will he remember everything on his own? Will Austin have to choose between Maxie and Brook Lynn? Anything can happen in Port Charles so stay tuned to General Hospital airing weekdays on ABC. And don’t forget to check back right here regularly for all your General Hospital news, information and spoilers!