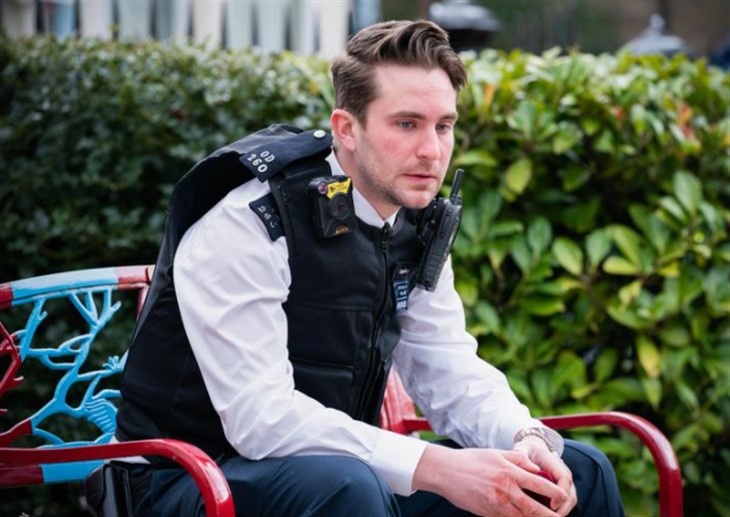 Eastenders spoilers reveal that Callum is torn when Ben Mitchell (Max Bowden) asks him to quit the police force. Later, Callum and his friend, Fitzy, spot Kat Slater’s (Jessie Wallace) mugger. They both chase the mugger but it ends with Fitzy getting stabbed and being rushed to the hospital. Callum will feel guilty and blame himself for what’s happened.

Later, Callum and Ben celebrate their anniversary. However, when Callum is distant, Ben assumes it’s about him being asked to quit his job. Ben suggests that they don’t talk about work for a little while. Callum gets the wrong idea and thinks that he can’t talk about Fitzy. Callum gets upset and rushes out.

Vi soon learns about Rainie and Stuart trying to find a surrogate. She tries to be nice to Rainie and get to know her better. However, she just ends up ruining both of the couple’s plans, and Rainie orders Vi to go home.

Linda realizes that she needs to tell Max that she is pregnant with his baby. She finds out that he’s in Paris. Meanwhile, Nancy Carter (Maddy Hill) tells Mick Carter (Danny Dyer) that if he isn’t sure about Max being told about the baby, then he needs to say something to Linda. However, Mick explains that it doesn’t matter how he feels about the subject. Max is the biological father and deserves to know that he’s going to have a child.

Also, Lola will give Ruby some parenting advice. She suggests that Ruby strike a deal with Lily. However, will this end up working or could it backfire?