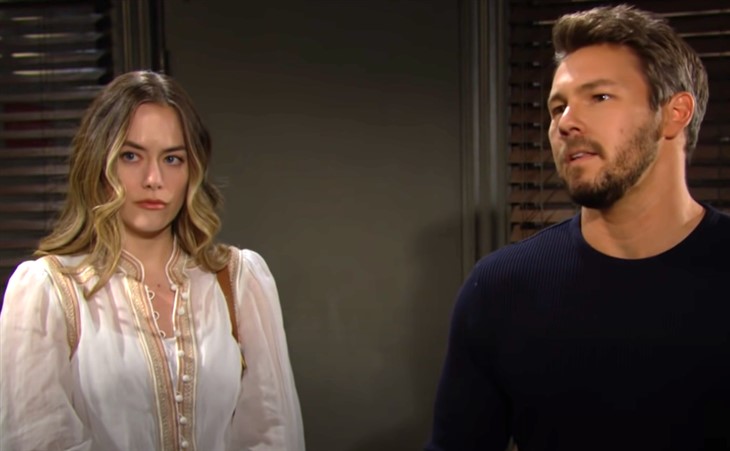 The Bold and the Beautiful spoilers reveal that Hope Logan Spencer (Annika Noelle) can’t do much about her husband’s predicament. She can get him an attorney but other than that, her hands are tied. She visits Liam Spencer (Scott Clifton) and brings him a gift. It will warm his heart but could also make him increasingly aware of how his confession is affecting the family.

The Bold And The Beautiful Spoilers – Liam Spencer’s Arrest

B&B spoilers reveal that Liam finally confessed to being the driver who hit Vincent “Vinny” Walker (Joe LoCicero). When he told his story to Chief Deputy Bradley Baker (Dan Martin), Liam wasn’t completely honest. He admitted to his own actions that night but left Bill Spencer’s (Don Diamont) name out of it. Baker knows that there are holes in Liam’s story but can’t seem to get any answers. Liam was arrested and charged with murder.

Hope went to Spencer Publications to tell Bill that Liam confessed and was arrested. Bill is furious and can’t believe that after all the extreme measures he took, Liam went ahead and turned himself in. Bill was worried that the police wouldn’t believe Liam hitting Vinny was an accident. It turns out that he was right, but only because Liam waited so long before confessing. He also can’t answer certain questions, such as where the vehicle is and what happened to Vinny’s wallet and cell phone.

Bill is now at the police station trying to do damage control. However, Liam isn’t making it easy.

The Bold and the Beautiful spoilers reveal that Hope will visit Liam in jail. She wants to check and see how he is doing. She also wants to be sure that Liam knows she will stand by him through this ordeal. Hope brings a present for Liam that she thinks will cheer him up. It’s a drawing that the children made for Liam. Of course, kid’s artwork is always heartwarming to look at. However, it doesn’t really help Liam get out of prison.

In fact, it could make Liam realize how his confession is affecting the children. He will wonder how they will cope when he actually goes to prison.

Even though Liam has been arrested and charged with murder, we don’t think he will actually be sentenced. Thomas Forrester (Matthew Atkinson) will find out about the confession and go into a rage. Afterward, he lands in a dangerous predicament. It is teased that it will impact Spencer Publications and certain characters in unexpected ways. We have to wonder if this has something to do with Vinny’s murder. Perhaps Thomas will stumble onto the person who is really responsible for Vinny’s death?

There is no word on Clifton leaving the CBS soap, so Liam will have to be cleared somehow. What do you think the truth is about Vinny’s murder and what does it have to do with Spencer Publications?