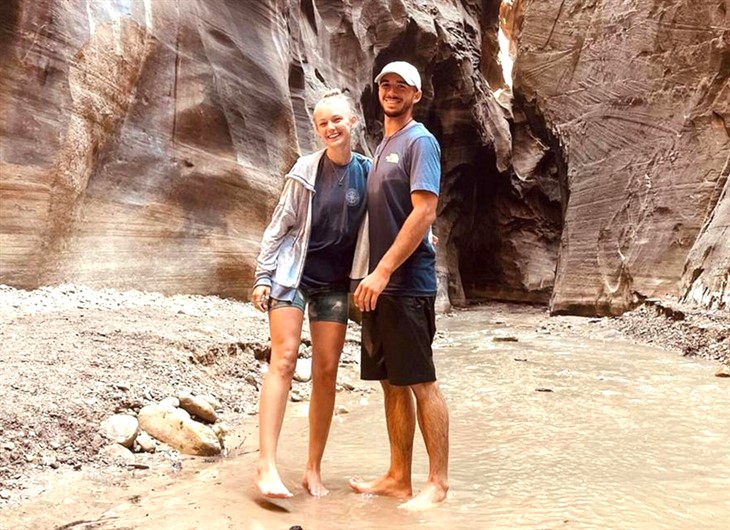 Brian Laundrie disappeared shortly before Gabby Petito’s body was discovered in Grand Teton National Park. The Denver office of the FBI confirmed that dental remains found on Wednesday are those of Brian Laundrie. Is the only person of interest in the Gabby Petito case really dead?

Shortly after the announcement was made by the FBI, two local officers from North Port, Florida visited the Laundrie home. “Chris and Roberta Laundrie have been informed that the remains found yesterday in the reserve are indeed Brian’s. We have no further comment at this time and we ask that you respect the Laundrie’s privacy at this time,” according to the Laundrie’s attorney Steven Bertolino. Gabby Petito’s family’s lawyer says the family will make a statement at a later time.

According to authorities, skeletal remains were found and proven to be human. Investigators also found clothing that is similar to what Laundrie was wearing when he took off on September 13th. Gabby Petito’s body was discovered less than a week after Brian took off from his parent’s home. Alone with the remains and clothing, a backpack and notebook were found as well. The notebook and backpack were found close to the remain in the Carlton Reserve. According to authorities, the notebook has not been processed yet.

The Notebook Is Possibly Salvageable

According to CNN the notebook was found outside and had been wet. However, sources say that the notebook is possibly salvageable. The investigators have to be very careful while trying to read the information contained in the notebook. It is not clear how the notebook ended up outside of the bag. Authorities will not comment on whether or not a weapon was found at the scene. Christopher Laundrie was the first person to notice an item belonging to his son.

Search Condition Have Been Difficult

Lee County Sheriff Carmine Marceno said that law enforcement had been searching these areas which were covered with water. There were times that the water was waist-deep and filled with snakes and alligators. Laundrie’s father moved the bag because he didn’t see anyone in law enforcement and didn’t want members of the press getting to it. Laundrie shortly thereafter turned the bag over to the authorities. The remains were found 2 to 3 miles inside the boundaries of the reserve.

Once the remains were located, the Laundrie’s were asked to leave the reserve. The North Port police made this statement about the parent’s visit to the park. “What I can say is that NPPD met the family at the park yesterday. We did not want them out there without our view. So we followed them around. Together at some times and within a few hundred feet at others. We are 100% confident the family did not bring any items, which were found yesterday, with them. We’ve been saying “odd” from the beginning, so nothing new there. The family did not locate or see the remains. The remains and items had clearly been there for some time.”

Exactly how many bones or their exact condition has not been revealed. We will update with more details when more information becomes available.