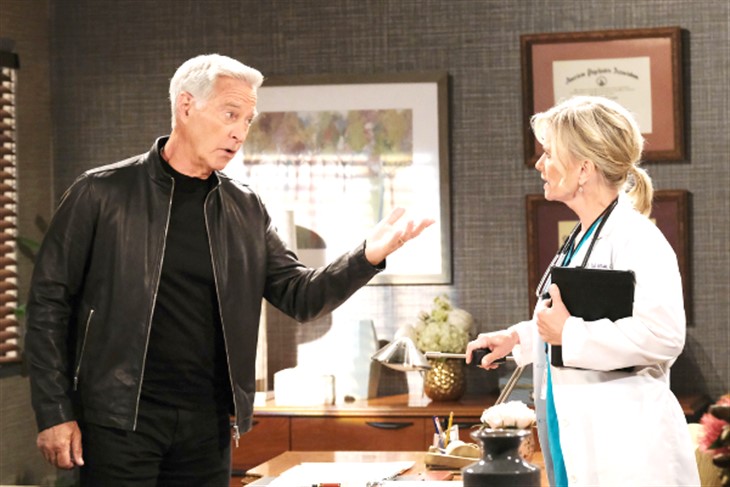 Days of Our Lives (DOOL) spoilers for Monday, October 25, 2021, reveal in Salem The Devil in Marlena coming up against the loving husband named John.

Days Of Our Lives Spoilers – The Ultimate Confrontation

It didn’t takelong to realize what’s really been going on with his beloved Doc. After all, he saw it coming a mile away the minute he knew Johnny DiMera (Carson Boatman) wanted to make a movie about his family’s history. That’s why he panicked when he learned that movie would now focus solely on the battle for Marlena’s (Deidre Hall) soul all those years ago.

All the signs were there, but those sunglasses were the dead giveaway. It was all so familiar to John. When he heard that recording from Marlena’s session with Doug Williams, that was the clincher.

Now, The Devil has revealed himself in Marlena and he seems more powerful than ever before. But John is not about to give up. He beat Satan before and he’s going to beat him again. It may take a few months, but it took a few months the last time. What will Lucifer do before John can get another successful exorcism going?

DOOL Spoilers – The Fight To Save Abe Carver

Meanwhile, John has no idea of the other horror that’s been unleashed in Salem. The mayor, his dear friend Abe Carver (James Reynolds), is down for the count and Kayla Brady Johnson (Mary Beth Evans) is doing everything she can to save him. As Abe fights for his life, he has visions of a life he once led and a woman he once loved. Abe goes through his history in Salem and examines his life. He has so much to live for. Will he realize that?

As Kayla does her best to bring Abe back, his family and loved ones keep vigil at the hospital. Lani (Sal Stowers) is beside herself and Eli (Lamon Archey) is there for comfort, as is her mother, the woman she calls Aunt Paulina (Jackee Harry).

Julie Williams (Susan Seaforth Hayes) also lends her support to Paulina, a woman she has never gotten along with before. As everyone comes together for Abe, will he return to his family to marry this new woman he loves — as he also discovers a horrible secret? Stay tuned to Days of Our Lives weekdays to see how these stories play out.