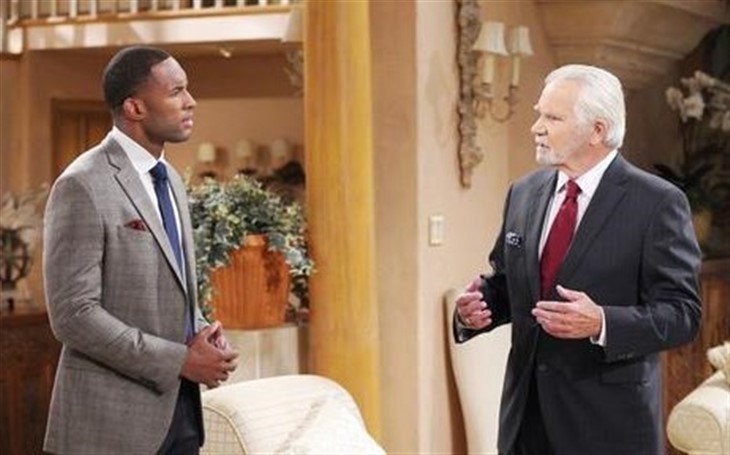 The Bold and the Beautiful (B&B) spoilers indicate that once again Quinn Fuller (Rena Sofer) will find herself torn between two men.

For the past few months, Quinn’s been caught in a love triangle with Eric Forrester (John McCook) and Carter Walton (Lawrence Saint-Victor). Although Quinn loves Carter, she decided to stay with her husband. Quinn feels she made the right decision, however upcoming events may have her changing her mind.

Quinn’s marriage to Eric has been on the rocks for a while. Their issues are about to worsen when Quinn learns about Donna Logan’s (Jennifer Gareis) interference in her marriage.

Of course Quinn’s going to furious about Donna putting the moves on her husband. The jewelry designer has had to put up with the antics of the Logan sisters for too long and she finally puts her foot down. Quinn issued an ultimatum that Eric remove Donna from his life.

Eric gave in to Quinn’s demands, but it may have been for nothing.

It wasn’t that long ago that Quinn was in love Carter. Their steamy affair turned into the real deal when the couple realized they were in love. However, Quinn dumped him to stay with Eric.

But Quinn may regret her decision when she learns of Carter’s new gal pal.

B&B has been foreshadowing a romance between Carter and Katie Logan (Heather Tom). The two have become close as they commiserate about their broken hearts.

Carter and Katie’s new bond isn’t going to go unnoticed by Quinn. As expected, the jewelry designer is going to be butting into her ex’s new romance. Yet, unlike Donna, Katie isn’t going to back down from Quinn’s threats.

Quinn gave up Carter for Eric. The lawyer is no longer any of her concern. Carter can’t sit around the rest of his life pining over Quinn. He needs to move on, and Katie is helping him do that.

The Bold And The Beautiful Spoilers  – Which Man Does Quinn  Forrester Want?

Quinn has once again found herself torn between two men. She thought she made the right decision staying with Eric, but she’s starting to doubt her choice.

Seeing Carter move on with Katie will make her realize she gave up a good man. She could’ve had a life full of happiness and passion with Carter, but she threw it away.

As for Eric, although Quinn loves him, their attraction may not be as strong as it once was. Yet, that doesn’t mean she’s giving up on him. She sacrificed a lot to stay with him, and she wants home to do the same. If she has to give up Carter, then he has to do the same with Donna.

Quinn loves both men, yet is unwilling to give them both up. The last thing she wants is the Logan women taking her men, but that’s exactly what’s going to happen. The question is which man will she be more upset about losing.

Days Of Our Lives Spoilers: Ciara And Susan Try To Identify Who Would Pose A Threat To The Baby