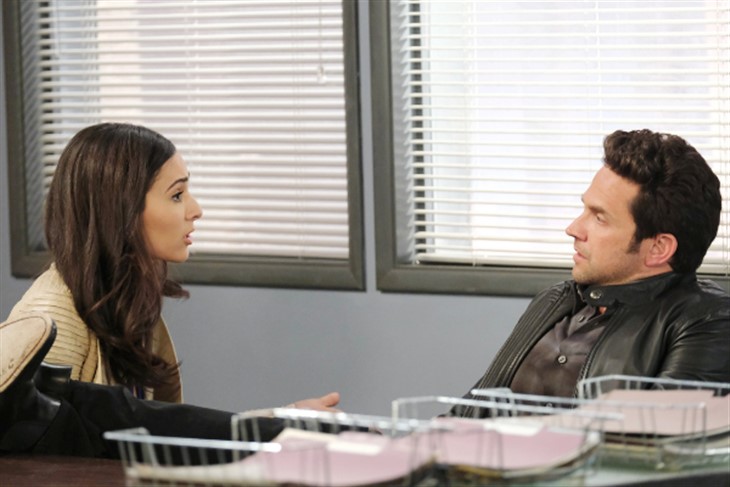 Days of Our Lives (DOOL) spoilers tease that Jake DiMera (Brandon Barash) will make a deal with District Attorney Melinda Trask (Tina Huang) to secure his freedom – he’ll agree to testify against Kristen DiMera (Stacy Haiduk) in an upcoming episode of Days of Our Lives!

Days of Our Lives viewers know that Jake knows all about his wicked sister- and her impersonations of his former lover Kate Roberts DiMera (Lauren Koslow) that led to their very bad breakup! Jake thought Kate had dumped him for no good reason and that is why he cheated on her with Gabi Hernandez (Camila Banus). Kristen was so good at playing Kate that he couldn’t tell the difference and neither he nor Gabi knew Kristen was dressed up in a Kate mask and clothing as a disguise in order to hide in plain sight!

They didn’t know until the real Kate dragged herself into their room at the DiMera mansion looking like death warmed over – and indeed, she could have died, she was in such bad shape! Days of Our Lives viewers will remember that Kristen had drugged her and stuffed her into a duffel bag, intending to ship her over to the same Greek island that she probably shipped Sarah Horton (last played by Linsey Godfrey) to in a crate! Alone, what Jake knows about her kidnapping and impersonation of Kate will rack Kristen up a lot of time behind bars!

Days of Our Lives viewers know that Jake really doesn’t have a lot to work with – no one is going to believe that a dead man broke him out of jail and buried him alive! Trask already has Ava Vitali (Tamara Braun) in custody for Carmine Merlino’s (Richie Stephens) murder, although Jake is charged with bringing him to town! Oddly enough, Ava had a zombie story too – but since dead men don’t leave fingerprints she can’t use that defense!

Trask could just have easily charged Jake with the murder but his fingerprints weren’t on the murder weapon either! Days of Our Lives viewers know that about the best shot Jake has at freedom is to make a deal with Trask to testify against Kristen about what he knows about her abduction and impersonation of Kate! He will be a corroborating witness to Kate’s story of what happened to her, but that’s all Jake has going for him.

Days of Our Lives viewers know that right now, Jake and Kate may be the only available witnesses against Kristen! Sure, she could stick Kristen with an additional charge of attempted parental kidnapping but she didn’t get out the door with little Rachel Black (Finley Rose Slater). Days of Our Lives viewers know that the truth about the missing Sarah has not come out yet, and even though Susan Banks (Stacy Haiduk) could testify about switching places with Kristen all those months, she wouldn’t. It would incriminate herself, and besides, she’ll be stuck in a different kind of prison with John Black (Drake Hogestyn) soon!

Melinda’s main mission, however is to prosecute Kristen for the death of her daughter Haley Chen (Thia Megia). Haley’s tumble down the stairs at Salem University Hospital was actually accidental, but Melinda doesn’t care. The fact was, if Kristen had not run out of the hospital in a blind rage after being told her baby died and pushed Haley out of her way as she was standing at the top of the staircase, she wouldn’t have died. For that, Melinda can never forgive her and she wants revenge!