Days Of Our Lives Spoilers: Ciara And Susan Try To Identify Who Would Pose A Threat To The Baby 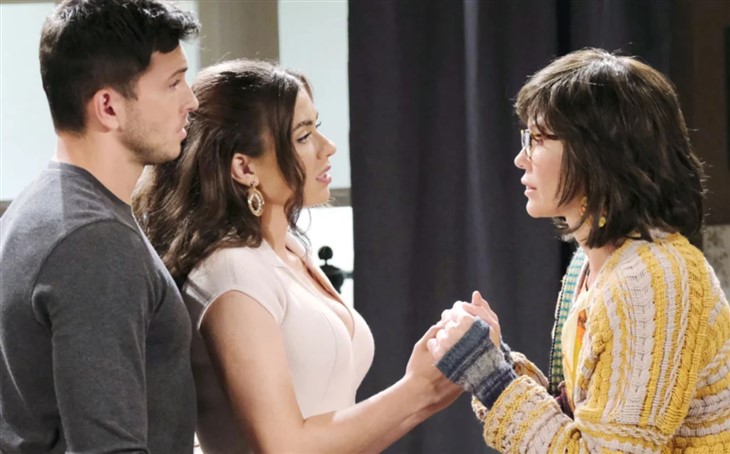 Days of Our Lives (DOOL) spoilers tease that Ciara Weston (Victoria Konefal) and Susan Banks (Stacy Haiduk) will try to identify who would pose a threat to Baby Weston when Susan has premonitions of danger in an upcoming episode of Days of Our Lives!

Days of Our Lives viewers will recall that Susan is prone to premonitions, and she comes to Salem when she hears of Ciara’s pregnancy and senses evil, danger, and a bad, bad, bad person who will be a danger to Baby Weston! As a matter of fact, she’ll pass out in Ben Weston’s (Robert Scott Wilson) arms when she puts her hand on Ciara’s belly! At first, Ciara secretly scoffs, but after Ben tells her how Susan’s premonitions led him to find Ciara when she was kept in a glass room all those months first by Allan Rhodes, (Jason Downs) who had been Vincent Belman’s (Michael Teh) pilot, then by Evan Frears (Brock Kelly) Ciara takes Susan a bit more seriously!

Days of Our Lives viewers will see Susan and Ciara try to figure out who might be this person posing a threat to the baby. Evan would probably be at the top of the list, but he’s still in prison, so it’s probably not going to be him. Evan is not likely to be up for parole for a long time, and even if he tried to escape, not only will the Statesville Guards be trying to prevent him from doing so, so will Clyde Weston (James Read)! Clyde wouldn’t want his grandchild at stake no matter how many other redeeming qualities he doesn’t have!

Even though as Days of Our Lives viewers know Susan will look for more information from the great beyond, Ciara and she talk about what’s gone on here on earth as well. Ciara will recount to her, among other things, the night she felt certain that the baby’s conception took place, and how a strong wind blew into the room, even opening the window which had been closed! The wind was loud, and strong, and eerily whistled as it blew out all the candles, and anything not tied down practically! Ben and Ciara had to hang onto each other and the bed, the wind was so strong and so unexpected – and so weird!

Days of Our Lives viewers can expect that Susan will take this as an omen – a sign of the evil that she senses surrounding the unborn child! Ben’s nightmare of their teenage son strangling the babysitter may be referred to, and Susan doesn’t think what she senses has anything to do with Ben’s nightmare – it was just his fears coming out in his dreams, as he had recently concluded on his own.

Days of Our Lives viewers can expect that Susan will feel the wind coming into the bedroom when Ciara said she felt the moment of conception was from a supernatural source, and not the good kind of supernatural either! Susan tells Ciara and Ben that the wind was the evil – and that it was some kind of a evil spirit or worse that was coming after the unborn baby! Days of Our Lives viewers can imagine the fear Ben has, even as he tries to rationalize it away – he knows that Susan has a real flair for the dramatic!

But at the same time, it makes a fearful kind of sense to both Ciara and Ben when she puts it that way! Susan remembers when Marlena Evans (Deidre Hall) was possessed by the devil all those years ago, and when Marlena comes to see Ciara with Susan still there after Ben goes to talk to her, she is just about ready to tell them that it’s the devil himself after Baby Weston, but MarDevil interrupts her!