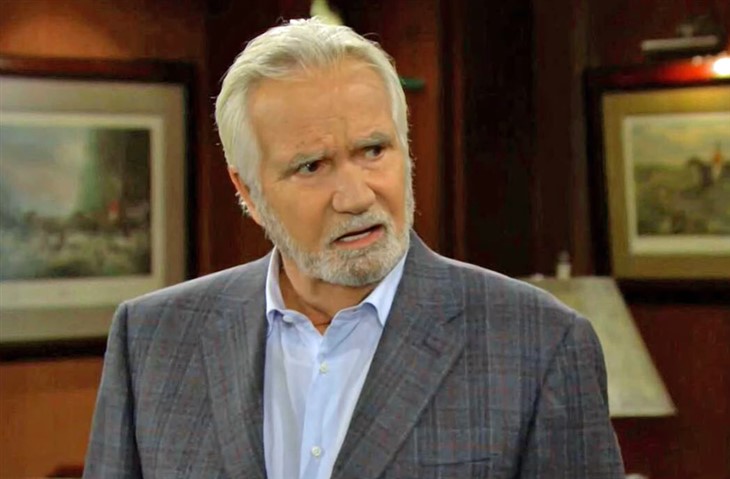 The Bold and the Beautiful spoilers document that Eric Forrester (John McCook) will be wrongly attacked by Quinn Fuller (Rena Sofer), who claims to love him so deeply. Based on a misconception, Quinn decided that Eric betrayed her. Wrong.

Quinn thinks Eric cheated on her is because she did that with Carter Walton (Lawrence Saint-Victor). Devoted viewers also recall that Quinn kissed Eric’s son, Ridge Forrester (Thorsten Kaye), in the recent past.

In Quinn’s mind, everyone makes the same choices as she does. Yes, that is an expression of her narcissism.

The Bold And The Beautiful Spoilers – Me, Myself, And I, Eric Forrester

How has Eric benefited from Queric? It would be fair to add a comma and the word lately to the last question.

How has Eric benefited from Queric, lately?

Those who believed or still believe that Queric was once okay can not possibly use logic when referencing the current edition of this couple. Quinn’s incredibly selfish choice to take Eric’s advice and continue Quarter proved, to all reasonable minds, that she is all about herself.

Me, myself, and I. Yes, that is a way to describe how Quinn thinks about life.

Brooke Logan Forrester (Katherine Kelly Lang) has disrupted other people’s relationships. She and Ridge have divorced and remarried a ridiculous number of times, even in the soap world.

However, pointing to Brooke’s life to not talk about Quinn’s world is purely a deflection. Brooke was, is, and will continue to be right about the Quinn effect on Eric’s life.

Sofer is a great actor who projects Quinn as a total destabilizer. At this point in Eric’s life, he needs love, not daytime drama.

The Bold And The Beautiful Spoilers – Donna Logan Is The Antidote

Donna Logan’s (Jennifer Gareis) interactions with Eric could not be more of a contrast to Quinn’s me-first approach. Donna defers to Eric. Quinn wants Eric to defer to her.

It is fair to say that Quinn does love Eric. Her willingness to leave Carter and claim that she will stay with Eric until his situation resolves was truthful.

But every viewer knows that if the Donna-Eric spark had not happened, then some other exaggerated or invented issue would have set Quinn off at some point.

There were only two pro-Quinn advocates, Eric and Shauna Fulton (Denise Richards). Eric is about to drop his defense based on Quinn’s accusation that has no basis in reality. She will further the likelihood or certainty of a Deric reunion as a result.