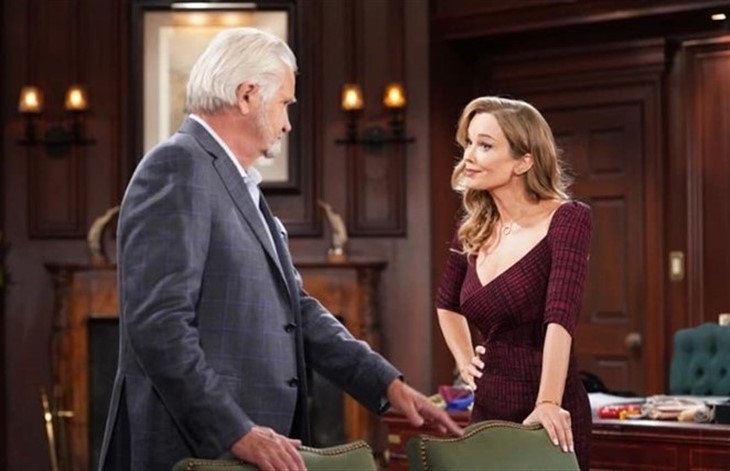 The Bold and the Beautiful spoilers document that Eric Forrester (John McCook) has gone well beyond the line. He has afforded Quinn Fuller (Rena Sofer) consideration that she did not deserve.

The Bold And The Beautiful’ Spoilers – But Did She Demonstrate Gratitude? Of Course Not.

Quinn went wild after eavesdropping on Eric and Brooke Logan Forrester (Katherine Kelly Lang). Brooke serving as the source of the explosive information Quinn overheard set off the current Mrs. Eric Forrester, as she recently referred to herself.

And then there was Donna Logan (Jennifer Gareis). To define Quinn’s behavior toward her in the Forrester Creations’ executive office as workplace harassment would be mild.

To see Donna pinned against the desk, with Quinn holding a movable office chair in front of her legs was chilling and telling. Hardcore soap fans knew what was coming next, and then it happened in the next scene.

Brooke arrived. Donna was crying and did not withhold the reason from her Logan sister. Quinn threatened Donna because he found her to be appealing.

The Bold And The Beautiful’ Spoilers – Would Quinn Forrester Have Committed The Same Act If Eric Forrester Were Present?

No. She would have just yelled. That happened later, back at the mansion, when Quinn issued two ultimatums to her husband.

What did Eric do wrong? Quinn believes he broke a marital vow by talking with Donna and reacting as any man who appreciates an impressive lady would.

Viewers and Eric looked at Quinn with disbelief, as images of the Quarter scenes replayed in their minds. Eric did not see what happened with Carter Walton (Lawrence Saint-Victor). But the viewers did.

Eric is innocent. His reactions to Donna were natural because she is attractive. Donna is also a beloved ex-wife. He retains fond feelings for her and should.

The Bold And The Beautiful Spoilers – Quinn Fuller Is Guilty

No legitimate jury would clear Quinn. If even one juror favored Quinn’s cause, then that person would deserve to be investigated.

Quinn has the audacity to tell Eric to fire Donna and banish her from his life forever. In so doing, Quinn is confirming everything that Brooke and others have been warning Eric about for years.

Sofer’s character will blame the voices of dissent. Quinn will blame Donna and even Eric. That is what narcissists do because they can not blame themselves for their problems.

B&B Spoilers – Someone Else Is Always To Blame In Quinn Forrester’s Mind. Now, It Is Donna Logan.

Days Of Our Lives Spoilers: Susan Banks Learns The MarDevil Truth – Theo Back