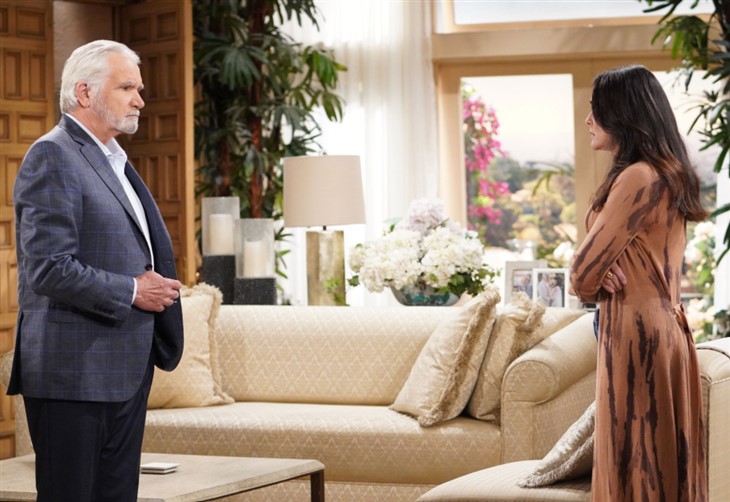 The Bold and the Beautiful spoilers document that Quinn Fuller (Rena Sofer) will learn the other love of her life, Carter Walton (Lawrence Saint-Victor), is becoming involved with Katie Logan (Heather Tom). Quinn would see anyone Carter would find appealing to be a new rival. Jealously is like that.

However, Eric Forrester’s (John McCook) awareness of Quinn’s reaction to Carter and Katie will be the plot point to keep an eye on. Eric bowed to his wife’s ridiculous wishes, or was it that he responded ridiculously in bending to her requests?

Regardless of how anyone perceives Quinn’s ask or Eric’s response, the process of cutting Donna Logan (Jennifer Gareis) out of his life proved painful and does not sit well with him.

The Bold And The Beautiful Spoilers – Where Are The Queric Fans?

Watching this pairing is like seeing a car with its flashers on parked on the shoulder of Mulholland Drive. One has to look out of curiosity and consider a question. What is that about?

And no, the visual reference was not a to what happened between Thomas Forrester (Matthew Atkinson) and Emma Barber (Nia Sioux) in the past.

The diversionary paragraph above was intentional, as it had nothing to do with Quinn’s actions. Such is her intention in making an issue out of an innocent situation so that Eric must defend himself, and Quinn’s recent betrayal is off the shelf.

Katie’s developing romantic interest in Carter will catch Quinn’s ever-watchful eye. Beyond that, Katie is a Logan and therefore represents a double enemy.

Carter may have finally found a woman who is solely interested in him. She is opposed to Zoe Buckingham (Kiara Barnes), who was chasing Zende Forrester Dominguez (Delon de Metz), while being engaged to Carter and Quinn, who split her so-called heart with Eric and Saint-Victor’s character.

Tom’s character has not been with Bill Spencer (Don Diamont) in many months. She also has no other intended love interests. So, Karter is a promising pairing.

Eric sacrificed the respect of his family when marrying Quinn, defending her through the years, and forgiving terrible betrayals. He comes across as being weak, with Quinn manipulating his insecurities. However, even Eric’s legendary power of forgiveness has its limits.

So, if Quinn specifically involves herself in Carter’s love life and she makes another play for him, Eric may come to his senses and file those legal papers. If so, many characters in this version of Los Angeles, California, and scores of viewers around the globe would offer a collective, booming, extended standing ovation.