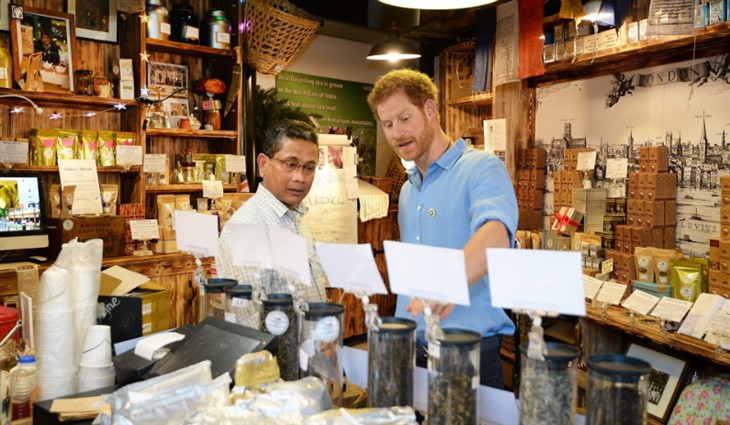 Prince Harry comes from old money, inherited money. He also gets British taxpayer money as do all senior members of the British Royal Family such as Prince Charles and Queen Elizabeth. Theirs is not self-made money, you won’t find that Prince Harry’s estimated net worth of £30 Million pounds was acquired through entrepreneurial endeavors, stock options or bonuses of any sort.

Most insiders can point to the fact that members of The Firm, including Prince Harry, grew up in a lavish, ultra-rich, ultra-privileged lifestyle. That means Prince Harry lived around housekeepers, personal assistants, nannies, and more. There was probably a royal chef, 10 butlers or more per palace, tons of security personnel, laundresses, gardeners, etc.

With all that, Prince Harry admitted in a 2017 interview that all he really wants is to be normal … and that means shopping for himself.

Prince Harry Admits No One Wants To Rule England

It’s a dirty job, but somebody’s got to do it … that’s the gist of Prince Harry’s statements concerning the monarchy. During the interview mentioned above, Prince Harry declared that “We’re involved in modernizing the British monarchy. We are not doing this for ourselves but for the greater good of the people. Is there anyone of the royal family who wants to be king or queen? I don’t think so, but we will carry out our duties at the right time.”

Interesting that Prince Harry believes the British masses need a king to rule over them. In his beneficence, Prince Harry has deigned to suggest that the monarchy is really all about altruism. See, there are these people who have done nothing to earn their positions above the rest … people like Prince Harry and the other senior members of The Firm … who have elitist attitudes?

No one wants to be king or queen, suggests Prince Harry. But, you know, a lad like Prince William (or Harry if 5 others drop dead first) has to do what a lad has to do.

But then, it’s okay that Prince Harry is just a tad condescending because after all, Princess Diana took him and Prince William to see homeless people when he was just a child. By viewing those much less fortunate than he, Prince Harry realized he actually wanted to have a normal life. Like Edward Tudor, Prince of Wales, in the novel “The Prince and the Pauper” by Mark Twain … Prince Harry just wants the freedom he imagines common blokes enjoy.

“Thank goodness I’m not completely cut off from reality. People would be amazed by the ordinary life William and I live. I do my own shopping. Sometimes, when I come away from the meat counter in my local supermarket, I worry someone will snap me with their phone. But I am determined to have a relatively normal life, and if I am lucky enough to have children, they can have one too. Even if I was king, I would do my own shopping.”

As anyone can see, if Prince Harry is caught up in fears that someone might take his photo while he’s out buying meat, well … he’s not really living a normal life now, is he? Who in their right mind, even as a celebrity of sorts like Prince Harry, is fearful that someone will take his or her photo? What, someone might sell the photo to a tabloid and that publication would then run some obscene, wildly untrue story about Prince Harry’s life?

Oh well, at least Prince Harry can buy meat, feel normal … and then head out to see if someone can get him a deal on that £50 Million Picasso painting he saw the other day. The British masses meanwhile, they can feel good that at heart, Prince Harry’s got what’s best for them in mind.

For all Royal spoilers, updates and news be sure to check back here on a regular basis. New stories and scandals concerning Prince Harry, Meghan Markle, and the rest of the British Royal Family are posted here daily!