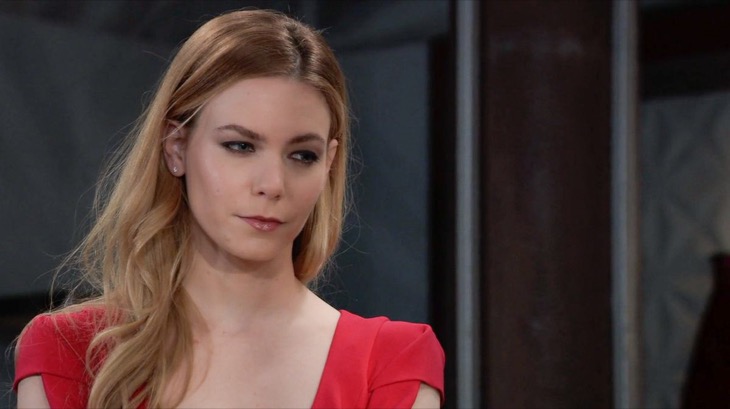 General Hospital (GH) spoilers recap for Wednesday, April 8, reveal that Josslyn Jacks (Eden McCoy) showed up at Jason Morgan’s (Steve Burton) place to discuss Nelle Benson Archer (Chloe Lanier). Josslyn asked Jason to take care of Nelle, noting that he didn’t care about the law, which was why he had to fix this.

Jason wondered what Josslyn wanted him to do, and Josslyn flashed back to the time when she and Nelle got in a physical altercation on the pier. Josslyn asked Jason to promise her that Nelle won’t get Wiley Quartermaine Corinthos (Erik and Theo Olson). Jason wondered why Josslyn assumed that Nelle would win the custody suit.

Josslyn flashed back to several memories of Nelle, including being close with Nelle and finding out for the first time that Nelle was her kidney donor. Josslyn said that Nelle has a way of getting people to believe things, and Jason reassured her that those facts are on Michael’s side. Josslyn then flashed back to meeting Wiley for the first time knowing she was his aunt.

Meanwhile, in the Corinthos kitchen, Willow Tait (Katelyn MacMullen) arrived and told Michael Corinthos (Chad Duell) and Sasha Gilmore (Sofia Mattsson) that Nina Reeves (Cynthia Watros) had hired Nelle. Willow lamented that they needed to do something to stop Nelle, and she flashed back to an earlier conversation when Sasha floated the idea of Michael marrying her.

Harrison Chase (Josh Swickard) showed up to say that he will be deposed in Nelle’s lawsuit against the hospital. Michael noted that Nelle just wants to hurt Carly Corinthos (Laura Wright) and everyone connected to her. Michael then flashed back to a scene in which Carly confronted Nelle for going after Sonny Corinthos (Maurice Benard). Chase somberly noted that the law was on Nelle’s side.

Willow protested, noting that Nelle was just trying to target Michael’s grandmothers because they rejected her in earlier days. Michael flashed back to the time when Bobbie Jones (Jacklyn Zeman) caught Nelle stealing at the Metro Court, and to two times when Monica Quartermaine (Leslie Charleson) treated Nelle poorly.

Willow got increasingly upset, saying that they needed to find to how to keep Wiley safe from Nelle. Michael said that if there was a magic bullet that would work, he’d take it, but that’s not how it works. Michael flashed back to a recent time when he told Jason he was going to play by the rules to beat Nelle. Willow left, upset, and Sasha went after her. Chase noted to Michael that he was worried about Willow.

At Crimson, Nina and Nelle bickered over the situation with Wiley. Nelle insisted that Willow and the others were conspiring to take Wiley from her, and Nina urged Nelle to reconsider and let Wiley get the heart procedure he’d need in a few months. Nina suggested that it would show everyone what a good mother Nelle was. Nelle flashed back to Carly locking her on the roof.

Carly then barged in the office, asking for a word with Nelle. Nina reluctantly agreed and stepped outside the office, where she encountered Jasper “Jax” Jacks (Ingo Rademacher). Nina explained that Carly was in the process of harassing Nelle, and Jax explained that the only reason Carly has to deal with Nelle is because of him.

Jax flashed back to telling Carly that he bought Nelle’s kidney for Josslyn. Jax then explained to Nina how he offered Frank Benson a million dollars for a kidney, and that soon Josslyn had her kidney. Through a series of flashbacks, Jax explained that he just wanted Josslyn to live and that while he hated what he did, he didn’t regret the end result.

Jax lamented that because of his actions, Carly, Michael, and Wiley were paying for it. Nina asked whether Jax would do the same thing again, and he said that he had no doubt that he’d save his daughter’s life. Nina said that there was no doubt she’d do the same thing if she had a daughter to save.

Meanwhile, in Nina’s office, Carly and Nelle argued. Carly said that she was about to give Nelle everything she’s ever wanted, then she proceeded to apologize for underestimating her. Nelle balked, saying that Carly needed to start by admitting that they’re just alike. Viewers then saw a flashback to 1995, when a young Carly (played by Eden McCoy) told her adoptive mother (played by Cynthia Watros) that she didn’t want to stay in Jacksonville.

Back in present-day, Nelle went on, saying that Michael was Carly’s golden ticket into the Quartermaines and that Wiley was her own golden ticket. Nelle said that she wanted the magic makeover, like Carly got, where all her misdeeds were washed away. “I want to be the heroine,” Nelle said. Carly said that if that’s what Nelle wanted, then she was going about it all wrong.

Viewers then saw some flashbacks of Nelle’s initial moments in Port Charles, when she met Carly, but Carly didn’t recognize her, and of Nelle disclosing that she was Josslyn’s kidney donor. Viewers saw another 1995 flashback with a young Carly telling her adoptive mother about her desire to travel the world and live in a big house.

General Hospital Spoilers: Elizabeth Spends So Much Time on Cameron, But What about Jake and Aiden? https://t.co/L7ohhpKPUz pic.twitter.com/RcaTxA9Nb2

Back in present-day, Carly rehashed some of her own history with Bobbie, and how she sought to take everything from Bobbie when she came to Port Charles. Carly then flashed back to the big scene when Carly learned exactly who Nelle was for the first time, and then back to 1995 when she told her adoptive mother that she was going in search of Frank.

Carly and Nelle continued arguing, and Nelle said that Carly could have welcomed her as a sister. Carly balked, saying that they weren’t related by blood. Carly then referenced how she tracked Frank down to collect his back child support payments, and that she didn’t even know that Frank had a daughter. Nelle said that wasn’t true, and that Carly did know. “Carly, you knew. You saw me,” Nelle said.

That was a great episode of GH, and there’s more to come, so stay tuned! We’ll continue to provide updates for you as more GH news comes in. Stick with the ABC soap and remember to check back with Soap Opera Spy for the latest General Hospital spoilers, updates, and recaps.