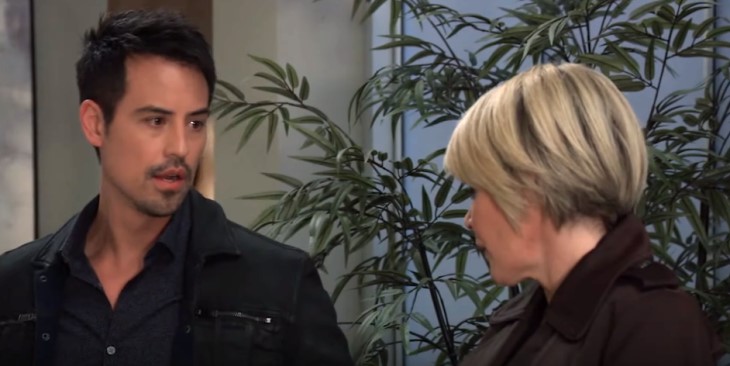 General Hospital Spoilers hint that Nikolas Cassadine (Marcus Coloma) might give his relationship with Ava Cassadine (Maura West) a real chance. This may come after a talk that he has that may get him thinking about the way that he has been treating her and what it may mean to be in a relationship with her. Could this lead him to try to make things work between the two, not just for money or anything he could get out of it?

When Nikolas came back into town, he made things complicated for Ava. First, showing up at her art gallery and causing her faint, which lead to her being admitted to the psych hospital. Then when he was put in there, he decided to sneak in and pretend to be a ghost in order to find out where Helena Cassadine’s (Constance Towers) picture was.

However, the tables turned on him when Nina found out that he had been to see Ava and then found his ring proving that he was still alive. This lead Ava to put things back on track and hide the picture from the Cassadine men. In order for him to get his hands on it, he would have to marry Ava and then would get everything he worked so hard to get.

Once married to Ava, he gave her the cold shoulder and decided to keep a distance between each other. Ava had her reasons for the marriage that had nothing to do with love, but it is clear that she still cares about Nikolas on some type of level. As she comes to his defense even when she has nothing to gain from doing so. Yet, Nikolas does not do the same for Ava.

However, in a recent episode, he had a talk with Kevin Collins (Jon Lindstrom), where Kevin talked about the way that he treats/ respects his wife, Laura Collins (Genie Francis). This might have gotten Nikolas thinking about his own relationship. When he was in the elevator, He began fiddling with his ring. It seems Ava may also be wishing for a real relationship for the two as she let her guard down as well by fiddling with her ring after talking to Nina. Could it be that she feels like she is missing something that she wants?

It seems that Nikolas may be thinking about putting forth an effort in his marriage with Ava. What do you think? Will their marriage work out, or will they continue to try to get one over on each other? We’ll give you updates as GH news comes in. Stick with the ABC soap, and don’t forget to check SOS often for the latest General Hospital spoilers, updates, and news.