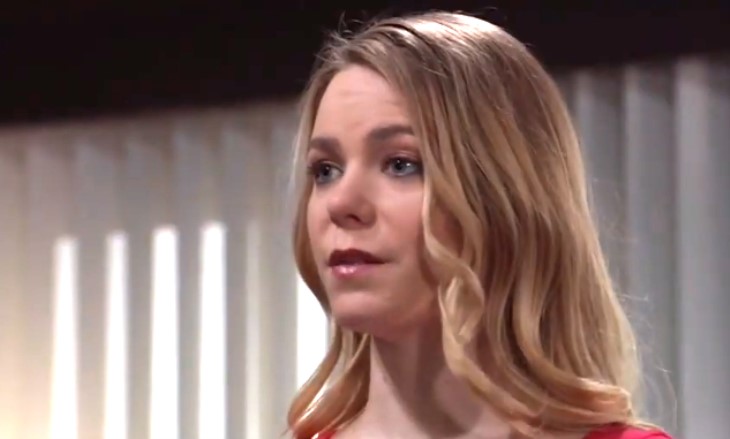 General Hospital spoilers tease that Nelle Benson (Chloe Lanier) may have wanted Maxie Jones’ (Kirsten Storms ) job at Crimson for more than financial reasons and looking good to family court so she could get sole custody of Wiley Corinthos (Erik and Theodore Olson) – Valentin Cassadine (James Patrick Stuart) may have hired her to spy on Nina and Jasper Jacks (Ingo Rademacher), and fans should find out for sure soon on GH!

General Hospital viewers will recall from recent episodes that Valentin checked up on Nina after seeing her and Jax having dinner in the Metro Court, his having been there to buttonhole Lucy Coe (Lynn Herring) into a deal to help her get Deception Cosmetics launched.

That deal had gone down the same day when Maxie quit Crimson. Valentin told Nina that he would always be there for her if he needed her and made it seem like a casual conversation – but he did find out Maxie had quit. All of a sudden Nelle shows up wanting Maxie’s job and she had not been just hanging out in the hallway waiting for Maxie to quit!

There has to be a connection somewhere, and Valentin may have contacted Nelle about the opening in Nina’s office after he found out, needing a spy in a well-placed spot to funnel intel about Nina and Jax to him. Valentin may be playing it cool, but General Hospital fans know that he is nowhere near “over” Nina Reeves and still wants her back as his wife even if they and Charlotte Cassadine (Scarlett Fernandez) have to live in a suite at the Metro Court!

He would like nothing better than to find a way to separate Nina and Jax, and maybe even dig up some dirt on Jax that he could use to get him permanently deported back to Australia, taking a page out of Sonny Corinthos’ (Maurice Benard) playbook!

General Hospital viewers will recall that the offices to Aurora Media, print division are in the same suite of offices as Nina’s Crimson Magazine office is, Jax having taken over Drew Cain’s (Billy Miller) old office. So even though Nelle didn’t get the job she wanted, Nina still hired her as an assistant so she will still be in the front office, with a vantage point to be privy to everything that goes on and everyone that goes in and out.

General Hospital Spoilers: Who Is The Best Man For Alexis Davis, Former Lover Or Someone New?https://t.co/O4sFbCNdXF

She may not have access to financials or anything all that important but she will have access to seeing the interactions between Jax and Nina and when they leave and arrive to Crimson in the morning, to see if they arrive and leave together. She will certainly know it if there is any personal monkey business going on between the two of them in either Nina’s or Jax’s office, although that is highly unlikely – they may share a lunch or a bottle of wine and some hugs and kisses but likely their desks will be used as desks, for Crimson and Aurora business and they’ll go to Nina’s suite in the Metro Court or to Jax’s house to conduct more, shall we say, “personal business”?

Nelle would also have access to project files and possibly other types of files kept in the offices, say those files that Curtis Ashford (Donnell Turner) found when he was working for Valentin – or files kept by Jax or Nina for the same types of purposes. Nelle will definitely be able to spy on Jax and Nina either separately or together for Valentin!