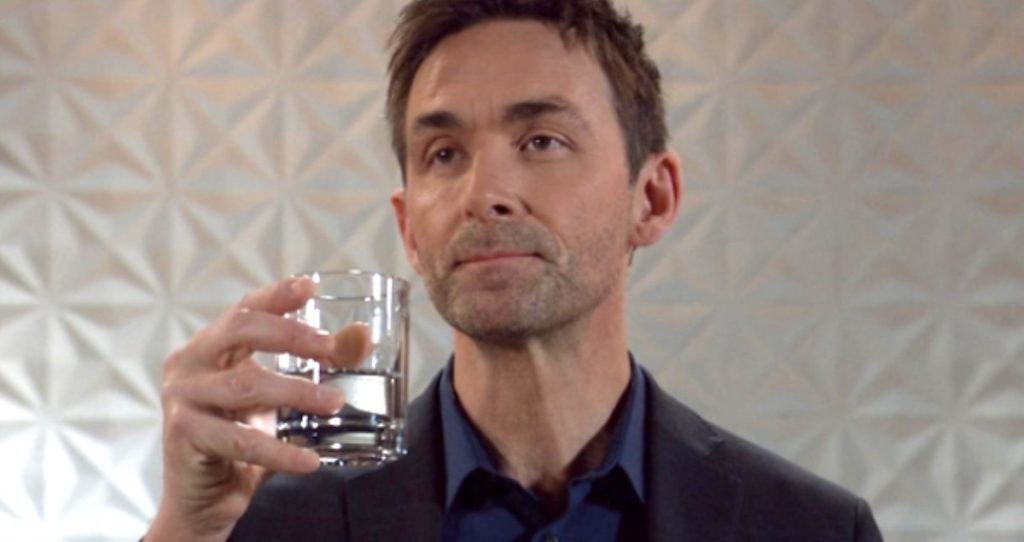 At The Metro Court, Valentin Cassadine (James Patrick Stuart) talks about Charlotte Cassadine (Scarlett Fernandez) with Lulu Spencer (Emme Rylan) and their custody arrangements for the little girl. An angry Lulu wants to prove Valentin an unfit father and has even threatened a restraining order against him to keep him away from their daughter, and Valentin had threatened Lulu in the same manner.

But now he is thinking a different way and tells Lulu that they can fight, or they can compromise. But will the stubborn Spencer even consider a compromise?

Meanwhile, Nina Reeves (Cynthia Watros) is still basking in the afterglow of she and Jasper Jacks’ (Ingo Rademacher) first time making love, and she appears to have no regrets, and she asks Jax if he does, just to be on the safe side! It’s doubtful that he has any regrets either after Nina told him in Friday’s episode that she has never been so happy in her life! It sounds like she has definitely moved on from her years with Valentin!

At Turning Woods, Willow Tait (Katelyn MacMullen) is visiting Lucas Jones (Ryan Carnes) as he had requested in Friday’s episode. He updates Willow on his family’s plans, meaning he and Brad Cooper (Parry Shen) are moving to Portland, Oregon where Brad has obtained a job and the hospital will take Lucas as well; of course, this means that Wiley Cooper-Jones (Erik and Theodore Olson) will also be cross country and it won’t be so easy for Willow to visit the child she thinks is her son. But at least she knows Wiley won’t be so easy for Nelle Benson Archer (Chloe Lanier) to harass her and try to get her hands on him!

At a nurses’ station at General Hospital, Brad tells Julian Jerome (William DeVry) that he’s finally doing exactly as Julian had asked him! He’s leaving town – but Julian didn’t want him leaving town with Lucas and Wiley, he wanted them to stay in Port Charles!

Brad will probably explain to him quietly that seeing Michael Corinthos (Chad Duell) and Nelle around town could trigger his memories of Brad telling him the truth about the baby swap and that Wiley is really Jonah Corinthos – Brad can’t have that happening, and Julian might agree with him when he puts it that way!

At the Quartermaine mansion, even after Michael explained to her in Friday’s episode that she didn’t yet actually possess her ELQ stocks to be able to sell them, and that she only had a claim to them, Nelle still brags to him that she is going to leave him and his family in the dirt! This is likely based on her going to Valentin and offering to sell him her stocks.

The problem is for Nelle, she doesn’t realize that Valentin is a lot smarter than she is and that Attorney Martin Gray (Michael E. Knight) is actually working for Valentin, not for her! But then Valentin is at a disadvantage when he finds out she’s only sold him her claim to the stocks – but then maybe Martin has found this out and they have a plan! Michael is also a lot smarter than Nelle is – and he undoubtedly has his own plan!

At the Corinthos house, it is obvious that Brando Corbin (Johnny Wactor) wants to help protect his “son”, Dev Cerci (Ashton Arbab) when he tells Sonny and Carly Corinthos (Maurice Benard, Laura Wright) to tell him everything he needs to know so he doesn’t blow this all sky high! If he’s going to pretend to be a kid’s father he needs to know what was fabricated about himself and the kid! Brando, along with Sonny, will have to figure out how to explain himself having been dead and suddenly resurrected because the premise of Dev being taken care of by Carly and Sonny is that he was an orphan and a part of his new identity!