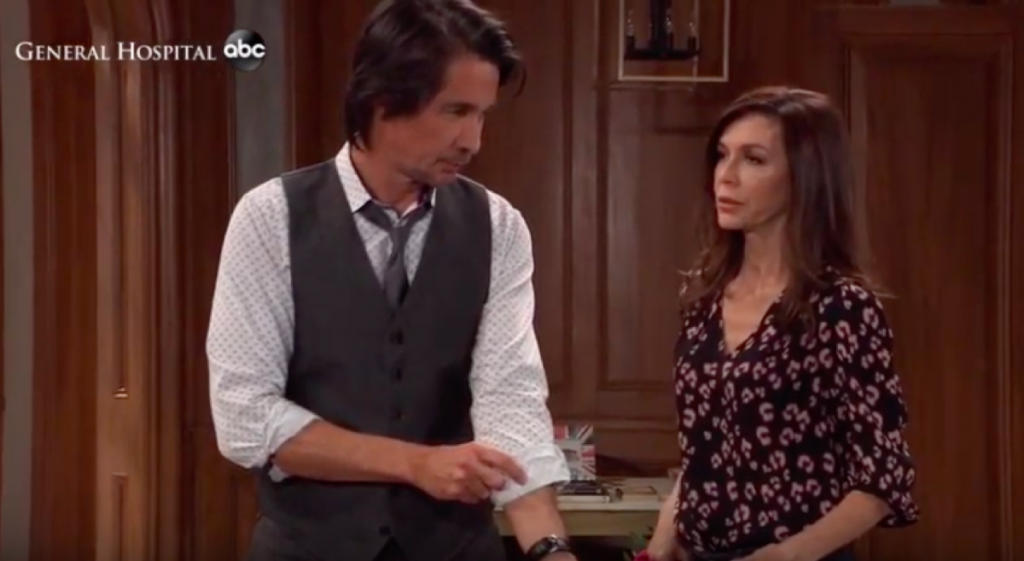 Anna Devane (Finola Hughes) and Dr. Hamilton Finn (Michael Easton) continue to argue about Peter August (Wes Ramsey) and Anna covering things up. Finn apparently tells her something she doesn’t want to hear as she asks him whose side he is on, and he responds, “Really?”

Finn thinks he is on her side trying to protect her from Peter and that she can’t see who and what he really is, and that she and his daughter Violet Barnes (Jophielle Love) could be hurt because of something Peter either has done in the past or recent past, or will do.

Still in a doctor’s office at General Hospital, Sam McCall, (Kelly Monaco) upset, tells Jason Morgan (Steve Burton) that she is the one who brought Finn into the case; they were hoping that District Attorney Robert Scorpio (Tristan Rogers) could get Sam’s parole problems fixed in exchange for intel on Peter and his connection to the disappearance and presumed death of Drew Cain, (Billy Miller) the two murder attempts on Dr. Andre Maddox, (Anthony Montgomery) and possibly an attempt on the life of Franco Baldwin (Roger Howarth).

Scorpio, unfortunately, couldn’t do anything because the Feds turned the deal down he offered after Peter called in a favor from someone he knew in the Federal prosecutor’s office in Tuesday’s episode!

Meanwhile, Peter has questions of someone – he asks someone “what’s goin’ on”?! This sounds like a casual encounter going by his phraseology, and other General Hospital spoilers say he will bond with Emma Scorpio-Drake, (Brooklyn Rae Silzer) so perhaps he’s talking to her or little Violet.

Valentin Cassadine (James Patrick Stuart) updates Attorney Martin Gray (Michael E. Knight) on his scheme to take over ELQ as he tells him he needs a majority holding to take control of this company! As General Hospital viewers will recall, Martin is working through Nelle Benson Archer (Chloe Lanier) to get the majority stock for Valentin, although she has no idea!

Maxie Jones (Kirsten Storms) is quite upset, and actually is crying as she confronts Jasper Jacks (Ingo Rademacher) in the Crimson Magazine offices. She tearfully tells Jax that she knows that he and Nina kissed! Jax doesn’t seem too unduly upset by Maxie’s meltdown! Perhaps Maxie is concerned Jax is making himself a target for a jealous Valentin!

At the art gallery, Ava Jerome Cassadine (Maura West) is worried – but she’s only worried about one thing – or actually, one person. She tells Nina that the only thing that worries her is Nina! It sounds like Maxie and Ava might both be worried about Nina’s romantic gravitation towards Jax and his towards Nina!