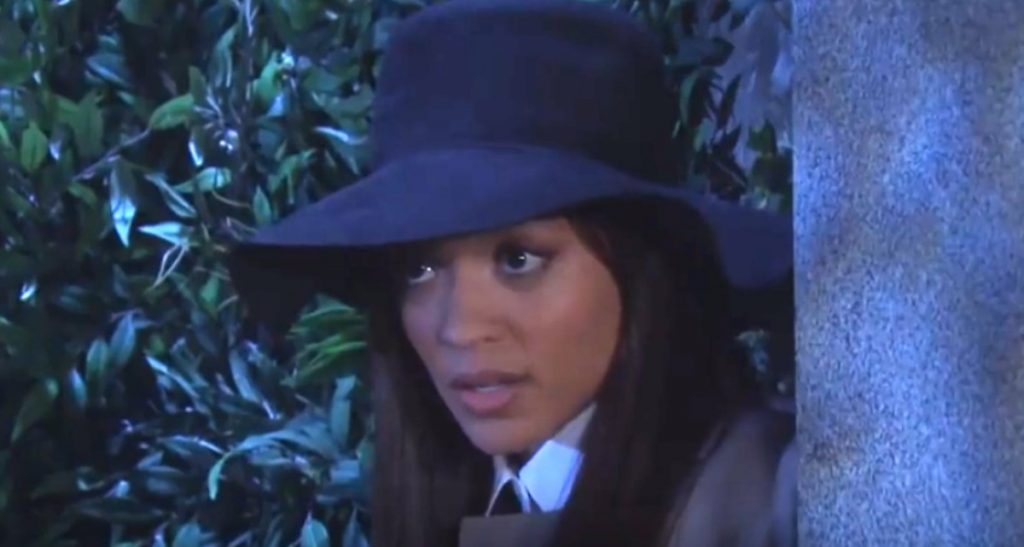 Lani Price (Sal Stowers) crashes Gabi Hernandez DiMera (Camila Banus) and Eli Grant’s (Lamon Archey) wedding, hiding behind a tree. However, Gabi spots her and her eyes shoot daggers Lani’s way, a silent warning that if she interferes in her wedding in any way, she will use the app on her phone to kill Julie Williams, (Susan Seaforth Hayes) who is officiating.

But Lani speaks up anyway and makes her objections to the marriage strenuously known! An incensed Gabi turns up the app to turn Julie’s pacemaker up all the way, which could have the effect of a killer heart attack – literally! The wedding guests in the front rows can see there is a cause and effect between Gabi fiddling with her cell phone and the next thing that happens!

Julie, who is standing in a position to pronounce her grandson Eli and Gabi man and wife, suddenly collapses, to everyone’s horror! However, Julie knows something that Gabi doesn’t, and as she pulls off an Oscar-worthy performance, being shocked as the woman she will shortly call a mendacious little bitch actually tries to kill her with that app on her phone!

Lani, in front of all the wedding guests, calls out Gabi, telling Eli in the process how Gabi had used Julie’s pacemaker and an app on her phone to force her to break Eli’s heart and dump him at their wedding, and JJ Deveraux (Casey Moss) backs up her accusations to the horror of all who see Julie now lying on the wedding platform!

Gabi, being backed into a corner with Lani and JJ’s revelations and Julie seemingly unconscious, is forced to make a huge admission – that what she is accused of is true! Then Julie gets up, and calls Gabi “a mendacious little bitch” and reveals that she faked this “heart attack” while JJ explains that he circumvented Gabi’s pacemaker switcheroo and intercepted the pacemaker brought into Salem University Hospital by Chris Choi (Chaz Kao) that was supposed to be implanted in Julie.

JJ saw him with Gabi previously, and they told him it was a watch for Eli – JJ became suspicious when he saw him in the hospital, knowing that the hospital stocks pacemakers in the cardiac surgery department!

Sonny Kiriakis (Freddie Smith) and Will Horton (Chandler Massey) separately recall their last Valentine’s Day together, which was months before the tragic death of Sonny’s mother, Adrienne Kiriakis (Judi Evans) which Will Horton has spent over a year in prison for when he recently found out that he didn’t cause the accident like he thought he had.

Sonny will probably spend his Valentine’s Day with Evan Frears (Brock Kelly) but maybe not, while Will is alone, his cellmate Ben Weston (Robert Scott Wilson) having escaped!