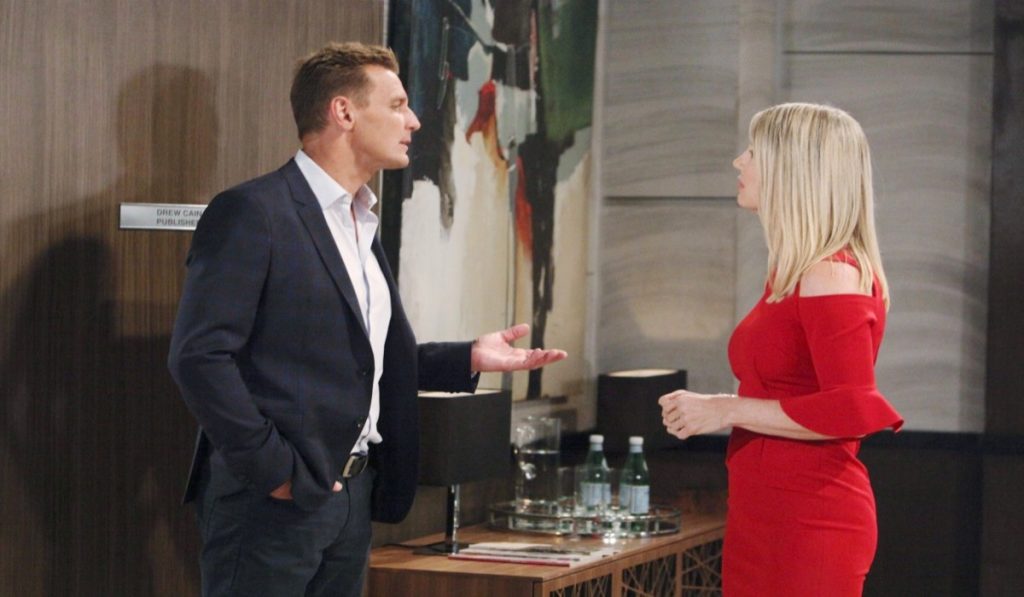 Welcome to your Monday, February 17th General Hospital (GH) recap! We begin our day at Jasper Jax’s (Ingo Rademacher) bedroom where Nina Reeves (Cynthia Watros) is lying on the bed. She pretends to be asleep as Jax brings her coffee in bed, they begin kissing again.

At the Corinthos mansion, Sonny Corinthos (Maurice Bernard) asks his wife Carly Corinthos (Laura Wright) how her mother is doing? Carly says Bobbie is fine, but sad that Lucas and Brad have decided to leave town. Carly thinks they deserve a fresh start far away from Julian.

At Turning Woods, Willow Tait (Katelynn Macmullen) stops by to see Lucas Jones (Ryan Carnes) who asked her to come by.

At General Hospital (GH) Brad Cooper (Parry Shen) summons Julian Jerome (William DeVry) and inquires as to who he will bully now that they are moving to Portland? Brad tells Julian congratulations, he’s getting exactly what he asked for.

Nina is at the Metro Court restaurant, Lulu Spencer (Emme Rylan) spies Valentine Cassadine (James Patrick Stuart) and makes a beeline towards him. She says she heard he is not a Cassadine, but he’s still Charlotte’s father. Lulu says he only cares about Charlotte’s interest when they match with his. Brook Lynn observes the fight and defends Valentin against anyone who has to face Lulu.

Brando Corbin shows up at the Metro Court and asks to see Lulu, he knows she’s writing a story about the shooting. He asks her to not write the story as the whole ordeal is too personal. Lulu says people love heroes and if he has any skeletons to bury, he should do it now.

At the Quartermaine mansion, Olivia Falconeri (Lisa Locicero) asks her husband Ned Ashton (Wally Kurth) if he knows who is going after the ELQ stock. He says whoever it is knows how to stay hidden.

Also at the Quartermaine mansion, Nelle Benson (Chloe Lanier) is talking to someone about how great the coffee is in the main house. She turns around and its Michael Corinthos (Chad Duell) who wonders when she is leaving – Nelle says she’s leaving today. Leaving them all in the dirt. Nelle says she has a buyer for the ELQ stock and she’s not telling them who it is.

Jasper Jax (Ingo Rademacher) says they don’t have to flaunt their relationship, just be honest and private. Jax and Nina arrive at the Metro Court for breakfast which perturbs Valentin. Valentin walks over and says to Nina that he will be waiting for her when she slows down.

Dev Corbin Ashton Arbab) comes to Sonny and Carly and says maybe he should leave town now that Brando has arrived. Carly says where will he go if he leaves school mid-year? He wonders if he should go to boarding school to getaway.

Willow visits Lucas and wishes him the best, though she doesn’t want to say goodbye to Wiley. Lucas tells her that they want her to be his designated guardian if something happens to them.

Brando arrives at the Corinthos house and wonders how he is supposed to pretend to be Dev’s father. Nelle meets up with Valentin to sell her shares of ELQ, he says he’s going to destroy Michael. She opens an envelope and its passports for her and Wiley.………flash to preview