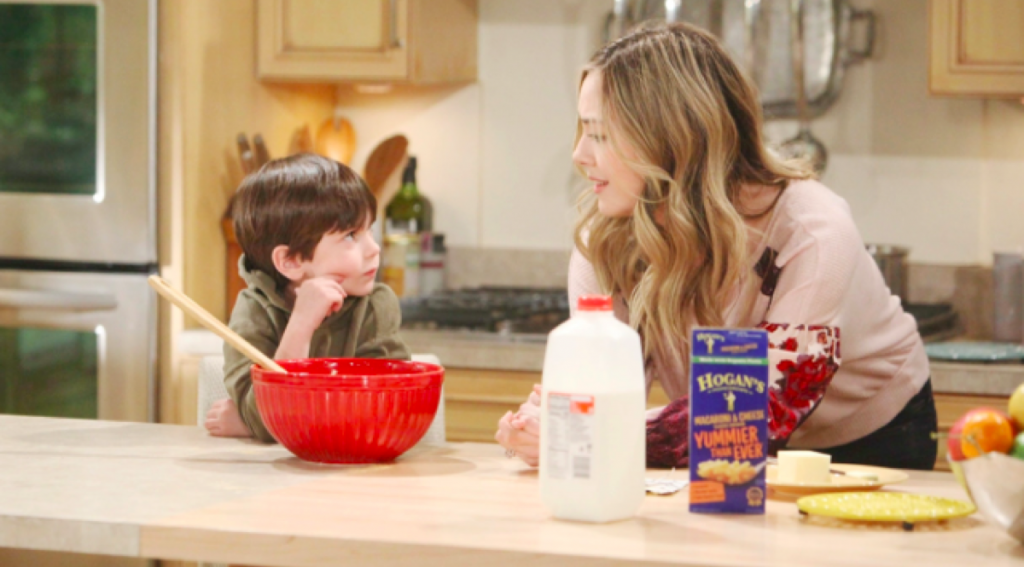 The Bold and the Beautiful spoilers for Tuesday, February 18, tease that Douglas Forrester (Henry Joseph Samiri) will once again be used by his father Thomas Forrester (Matthew Atkinson). As B&B viewers know, Thomas purposely provoked a big reaction out of Douglas when he flaunted his relationship with Zoe Buckingham (Kiara Barnes) at Zoe’s birthday party.

He arranged for Douglas to appear on the scene to witness his public displays of affection for Zoe, knowing that it would upset the little boy.

The whole plan was for Douglas to react and ultimately convey to Hope Logan (Annika Noelle) that he’d much rather that his dad was with her rather than Zoe. He nearly got that reaction out of the little boy, who was upset to see his father kissing Zoe and worried that perhaps Zoe was going to replace Hope as his Mommy.

Well, on Tuesday’s episode of B&B, Thomas will up his game a bit when it comes to using Douglas. The Bold and the Beautiful spoilers say that he’ll get an unwitting Douglas to send an important message to Hope, and it looks like it will be a big one. In fact, it appears that Douglas will end up telling Hope that he wants his Mommy and Daddy together, which is sure to strike a chord with Hope.

After all, Hope is all about protecting Douglas and giving him what he wants, but this will be one thing that she won’t at all be sure about. But then again, Thomas has made inroads in getting Hope to defend Thomas to Liam Spencer (Scott Clifton), so maybe Douglas’ words will plant a seed in Hope’s mind that will blossom later.

Meanwhile, on Tuesday’s new episode of B&B, Liam will decide to speak privately with Zoe. As B&B viewers know, he’s tried everything in his power to make Hope see that Thomas is using Douglas and Zoe to get to her, but Hope just doesn’t see it. So it seems that Liam will try to talk some sense into Zoe and get her to see that she’s being used by Thomas as part of a larger plan.

But it doesn’t seem like Liam will have much luck with Zoe, either. He’ll do his best to try to convince her that she’s just a pawn in Thomas’ ultimate plan, which is to get closer to Hope. He might even point out how Thomas was sure to kiss and fawn all over her in front of Douglas to provoke a reaction out of him, but it doesn’t seem like Zoe’s going to buy it.

Rather, it looks like Zoe will insist that Thomas really seems to be over Hope. She’ll probably argue that Thomas wouldn’t be so deep into a relationship with her if he were really pining over hope. After all, the two are sleeping together and Thomas has invited Zoe to events at the Forrester mansion, and he’s really seemed sincere. All of this will likely exasperate Liam, who will probably leave their meeting feeling frustrated.