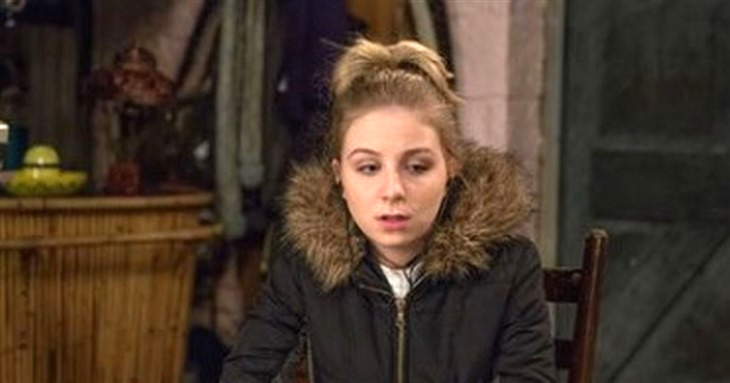 On Monday’s episode, Belle will tell Lydia Dingle (Karen Blick) and Sam Dingle (James Hooton) about her relationship with Jamie. The couple is surprised when they hear the details. Later, Nate informs Belle that Jamie tried to bribe him to keep quiet. The young woman is outraged by Jamie’s actions. Then, Jamie makes things even more difficult for Belle by throwing her into the middle of the situation. Jamie tries to convince Belle that she has to be the one to get Nate to agree to his terms. How will she handle this situation and what will she decide to do about it?

On Wednesday, Paul Ashdale (Reece Dinsdale) cooks dinner for Vinny (Bradley Johnson) and the girl he has a crush on, Liv Flaherty (Isobel Steele). However, Liv cancels, so Paul and Mandy Dingle (Lisa Riley) end up eating the meal instead. Later, Mandy lashes out at Liv for canceling but ends up shocked by the girl’s response.

Emmerdale spoilers for Friday reveal that Victoria finds out some sad news. She is informed that Annie Sugden (Sheila Mercier) has passed away. Marlon Dingle (Mark Charnock) feels terrible for Victoria.

Meanwhile, Belle is consumed with guilt over keeping the secret about who really struck Moira with a car. The inner turmoil comes back to haunt Belle when she sees Moira and can’t get past how much she is struggling. What will she decide to do about this situation?

Which storyline are you the most interested in for the week of August 24? What do you think will happen with Jamie Tate and Belle Dingle? What does the future hold for Nate Robinson, especially now that he’s about to become a father? How will Mandy Dingle deal with the bombshell that Liv Flaherty drops on her? We will have to keep watching the soap to see how these stories develop.