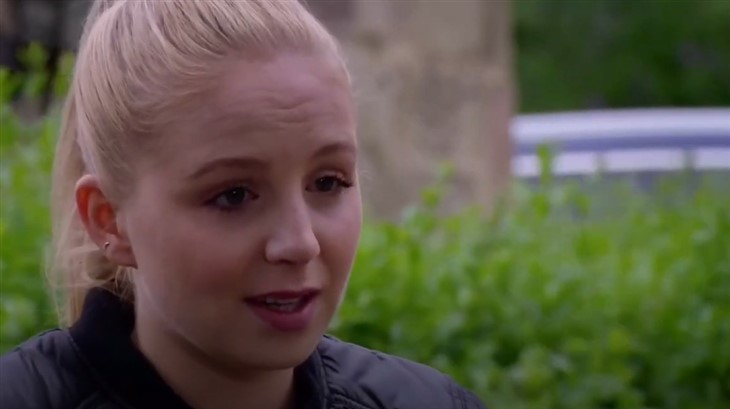 ITV Emmerdale spoilers reveal that Belle Dingle (Eden Taylor-Draper) might think she has Jamie Tate (Alexander Lincoln). However, she might be headed for heartbreak. As Chas Dingle (Lucy Pargeter) warns Belle, Jamie sets off to search for his runaway soon-to-be ex-wife, who has disappeared yet again.

Emmerdale spoilers reveal that Andrea Tate (Anna Nightingale) came back from running with Millie Tate (Willow Bell). However, after seeing Jamie and Belle together, she goes on the run again. Only this time, she leaves her daughter behind.

According to The Sun, Chas ends up giving Belle a gentle warning. She doesn’t want Belle to get hurt and even though Jamie professes his love, he has been back-and-forth before. There is no reason to believe that he will stay with Belle. This seems especially true after he reacts to Andrea vanishing again and leaving Millie behind.

There is also the issue of dealing with Kim Tate (Claire King). She’s the villain of the soap and she did warn Belle once before. These days, she is more concerned about keeping Andrea from vanishing with Millie again. However, she could turn her radar back onto Belle at any time. When she does, it won’t be pretty.

Next week, expect Jamie to be thrilled that Millie is back. But he is concerned about where Andrea could have gone to. When his mother mentions getting a phone call earlier in the day, Jamie tries to trace it. Then, he hops in the car and goes rushing after Andrea.

Now, he can justify it all he wants, but why chase after his soon-to-be ex-wife? Why not just let Kim and the lawyers handle the divorce and custody issues?

Chas’ warning might be a big clue that Belle is headed for heartbreak. Plus, we don’t really know what Andrea has planned. Sure, she vanished again after being devastated by seeing Jamie and Belle together. However, would she really leave her daughter behind? We don’t think so and there must be much more to this story. We’re not sure who the new villain is in this story — Jamie or Andrea?

Could this second disappearance be another one of Andrea’s schemes? Will she intentionally allow Jamie to find her and then give him an ultimatum? What exactly is she thinking? We will have to keep watching the soap to see how this storyline develops over the next few weeks.