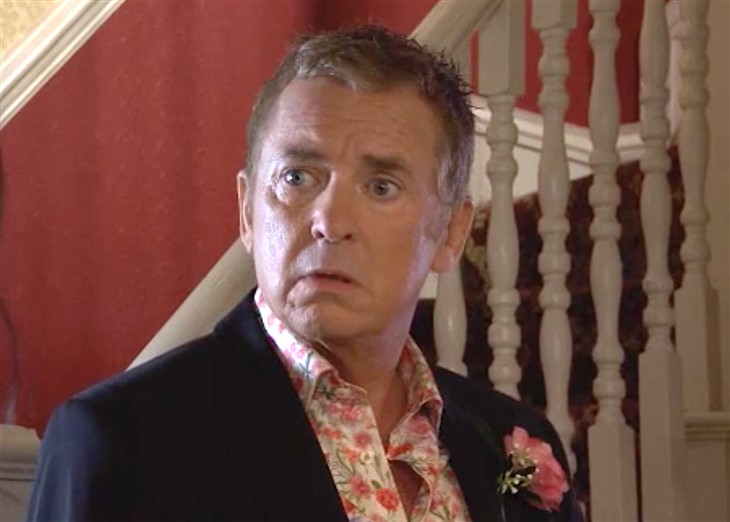 Alfie ties the knot in a mock wedding with an elderly woman named Joan, whom he met at a care home. The nuptials were actually the latter’s dying wish, which she’s granting. Kat Slater agrees to make the Vic as the venue for the wedding of the “happy couple.”

EastEnders Spoilers – A Mystery Is Unveiled

But there’s an unexpected twist to the mock wedding. Felix Baker (Matthew Morrison) was enlisted to officiate the ceremony as Tara Masu, which surprises Joan. The pensioner was happy as she made her grand entrance for their faux-nuptials.

Kat was touched by Alfie’s generosity, and the other guests were also happy despite knowing that it’s only a pretend wedding. But there’s one particular person who’s not amused about it all.

Joan’s long-time friend, Cecil (Adrian McLoughlin), who was present along with everyone else to celebrate the nuptials, looked sad to see Joan tying the knot.

But before the ceremony starts, Kat pulls Alfie to the side and tells him that there’s a problem. She explains that someone else is actually in love with Joan, and it’s no other than Cecil.

Alfie insists that he has no clue, but Kat argues that it was “blooming obvious.” Cecil clearly struggled with his feelings for Joan. But Kat feels as though Alfie didn’t notice because he was busy making himself look good. She then demands that he fix it and make sure that Cecil and Joan finally get together.

Alfie did his part, and Cecil and Joan are now together. Kat praises Alfie for making the effort to put things right, and her praises make Alfie feel thrilled. Does this mean Alfie now has a chance to be with her or is he just misreading Kat’s actions?

EastEnders Spoilers – Shane Richie Opens Up About His Character Alfie

Shane Richie, the actor who plays Alfie Moon, said that the lighter storylines help bring his alter ego back to peak years. The light-hearted storyline shows Alfie’s different side. Fans may recall that he had a child with Kat’s relative without the latter’s knowledge. Later on, Alfie found himself becoming one of Phil Mitchell’s nemeses.

“[Producer Chris Clenshaw] was so instrumental in telling me the long-term storyline with Alfie, and it’s the old Alfie,” he said. “You know, the guy who looked after his Nana Moon and wore his heart on his sleeve and tries to make light of everything. Through his own innocence and naivety, he still gets it wrong,” he added.