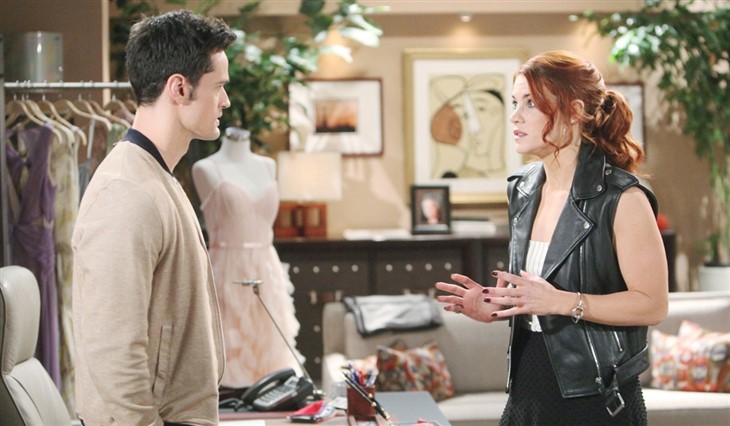 CBS The Bold and the Beautiful spoilers tease that a huge legion of dedicated fans want to see bad boy Thomas Forrester (Matthew Atkinson) and bad girl Sally Spectra (Courtney Hope) reunite. Is an explosive reconnection between these two baddies on the horizon?

Hope recently spoke to Soap Opera Digest about that possibility and while she didn’t spill too many critical beans, she did share what she thinks about these two former partners in crime mixing it up again.

The Bold And The Beautiful Spoilers — Should Sally Spectra And Thomas Forrester From An Unholy Alliance?

At the moment Sally is up to her eyeballs in trouble, having conned her loved ones into believing she has a terminal illness. She doesn’t, she just wanted to get Wyatt Spencer (Darin Brooks) back in her life and snag a reality show at the same time!

Thomas is in the same boat as Sally at the moment, having acted very badly to his loved ones, pretending to love one woman Zoe Buckingham (Kiara Barnes) in an attempt to get back together with another woman, Hope Logan (Annika Noelle).

Are these two deceitful, yet bold and beautiful at the same time, people meant for each other given their nasty streaks?

Hope weighed in on the subject expressing her surprise that tons of fans would like to see a Sally and Thomas reconnect. She said that many have said, “Screw Wyatt. Leave him. Now that Sally is crazy and Thomas is crazy they’d be fun together.” She said she laughed at the idea because it seems to be so widespread among the fanbase.

The Bold And The Beautiful Spoilers – What’s Next For Sally Spectra?

Back in the day, Sally was with Thomas when he was portrayed by Pierson Fode. Today the role is played by Matthew Atkinson. Would the same chemistry be there if Sally and Thomas hooked up today? Both are tremendous actors and we have no doubt they would pull off a sizzling reunion if it comes to that.

The Bold And The Beautiful Spoilers: Courtney Hope Dishes On Sally And Thomas, Will They Reunite? #BB #BoldandBeautifulhttps://t.co/xBwUagP2pN

Hope noted, “I haven’t heard anything about that … but … it could be a fun and interesting dynamic to see play out. Who knows?”

Do you want to see Thomas and Sally join forces and rock the town together? Or should they let the past stay buried? Tell us what you think B&B fans, is Sally better off with Thomas, and is Thomas better off with Sally?