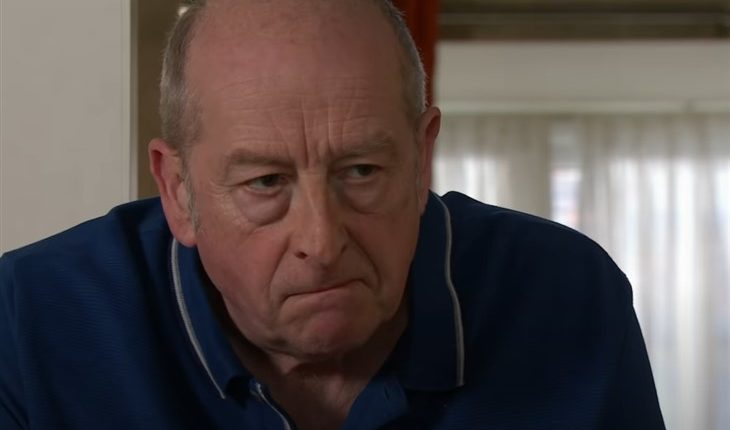 ITV Coronation Street spoilers reveal that Yasmeen Nazir (Shelley King) had a heart attack before her trial began. It was right at the same time as her telling Imran Habeeb (Charlie de Melo) about Elaine’s (Paula Wilcox) visit. However, could Geoff Metcalfe (Ian Bartholemew) do the unthinkable to make sure that Yasmeen is found guilty of attempted murder?

Corrie spoilers previously teased that someone from Geoff’s past would surface. It was speculated that it could be one of Geoff’s former flames. Plus, it was stated that the only thing that would make Tim Metcalfe (Joe Duttine) see the truth is hearing it from his own mother. When Elaine came to visit Yasmeen at the prison, she made a shocking confession and had her own story to tell.

Elaine told Yasmeen her story of living with Geoff and everything was exactly the same. Everything from convincing her she was an alcoholic to the hidden crosses to check for cleanliness. Yasmeen couldn’t believe what she was hearing. However, there is the question of if Elaine will testify on Yasmeen’s behalf to show the court that Geoff has a history of abuse. If could end up clearing Yasmeen.

Coronation Street spoilers reveal that Elaine is hesitant to face Geoff again. She has been hiding all of this time. While she could put the nail in Geoff’s coffin, it will only happen if she comes forward. In the meantime, Yasmeen is taken to the hospital when she suffers a heart attack. It is teased that once Elaine hears about what has happened, she will make a huge decision. However, Geoff could intervene.

According to Express, there is a chance that when Geoff and Elaine come face-to-face, the abuser could make a decision of his own. In order to protect his secret and reputation, could he kill Elaine to prevent her from testifying? He might try, but we don’t think he will be successful. After all, there has to be justice for Yasmeen at some point. Plus, it is implied that Tim finally turns on his father and we think Elaine’s story has a lot to do with that.

What do you think Geoff is going to do once he learns about Elaine? Will she testify at Yasmeen’s trial? What will be the end result of his emotional storyline and will there finally be justice for the abuse victim after all of this time?

Days of Our Lives Spoilers: Captors Turn Ben Back Into the Necktie Killer on Purpose