Neighbours doctor David Tanaka is still fighting for his life as he must have an emergency kidney transplant.

Viewers watched this week as David Tanaka was knocked off of his bike in the middle of the night and left fighting for his life. When he was taken to hospital things didn’t look good as he needed one of his kidneys removed. Just when his loved ones think things are looking up (people can survive with one kidney after all) it is to be revealed that his remaining kidney is failing. 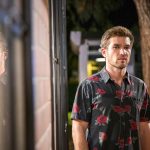 David is desperately in need of a kidney donor, but no matches are found in his immediate family. Harlow Robinson is too young to see if she would be a viable donor, and the fact that Terese Willis is an alcoholic also rule her out. Fans shouldn’t worry too much though, as it’s not long before a familiar but possibly unwanted face steps up and offers David a kidney…

Elsewhere, Kyle Canning is struggling with the fact that he was responsible for what happened to David. We last week reported the Kyle accidently fell asleep at the wheel, not knowing that he hit David until some while later when he realised the paint chippings on the bumper of his car match David’s bike. Kyle is understandably desperate to help David and put things right with him and Aaron, but it’s proving to be a hard task.

To try and take Kyle’s mind off of things, Toadie suggests that they go on a bike ride together in his best attempt to keep him occupied. However, this only causes Kyle to relive his memory of the accident, as David was on his bike at the moment that Kyle hit him. Will Kyle ever be able to forgive himself?

Tune into Neighbours on Monday 2nd December to watch these scenes unfold!