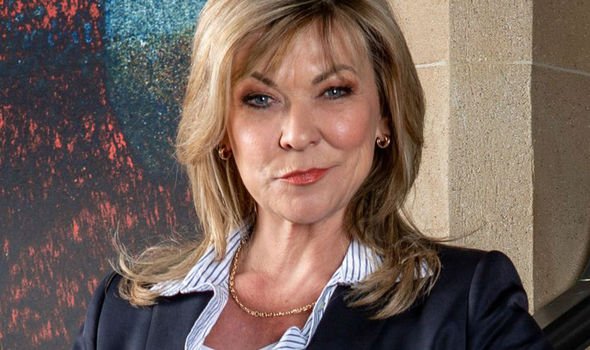 Emmerdale spoilers reveal that rejection can lead to revenge in the soap opera world. Kim Tate (Claire King) was rejected by Graham Foster (Andrew Scarborough). Then, she discovered that she was quickly replaced with Rhona Goskirk (Zoe Henry). Revenge has been teased, as Scarborough said that Graham’s mistakes catch up to him.

Graham and Kim have been involved in a bitter feud ever since she was rejected. That was humiliating enough to her, but then salt was rubbed in the wound when Graham quickly replaced her. As fans know, the character is now romancing Rhona Goskirk. The jilted woman has made a vow to destroy the relationship.

Although some people make threats in the heat of the moment, they rarely act on it. However, this won’t be the case for Kim. Fans know exactly what she is capable of and Graham should not only be concerned about himself, but how the revenge plot will affect Rhona.

As for the blossoming romance, it has just made Kim even more determined to make him suffer. According to Scarborough’s statement to Digital Spy, the actor teased what fans can expect.

“If Graham has any sense, he’d run and run fast, because every mistake he’s ever made is about to catch up with him.”

Graham will be lucky if his new relationship crumbles under Kim’s reign of terror. However, she is probably planning so much more. In fact, fans are concerned that Kim’s fury to lead to Graham or Rhona’s death. As reported by Metro, Scarsborough is leaving the soap. However, we don’t know exactly how his character will exit.

What could be worse than death? Watching a loved one lose their life because of someone’s vendetta against you. It is entirely possible that Kim has thought out how to make Graham suffer for the rest of his life. Rhona dying because of Graham would be something he would carry forever. It would also give the storyline a “dramatic twist,,” which Scarborough teased during a recent interview.