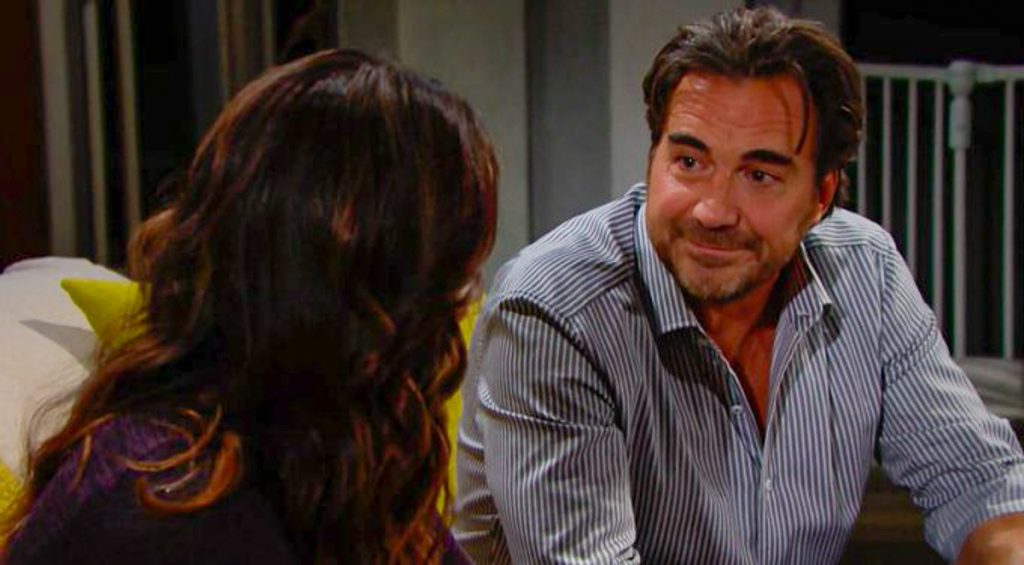 The Bold and the Beautiful spoilers for Thursday, November 14, tease that Ridge Forrester (Thorsten Kaye) will be deeply concerned about his son Thomas Forrester (Matthew Atkinson). Thomas will be a no-show for a design fitting, which Ridge will find strange. Ridge will conduct the fitting by himself, and he’ll show off Thomas’ design to Steffy Forrester (Jacqueline MacInnes Wood). Steffy will be impressed.

Steffy and Ridge will then discuss Thomas – Steffy will not have heard from him, and Ridge will say that he didn’t see Thomas or Douglas Forrester (Henry Joseph Samiri) at the Forrester mansion that morning, although he made a call and discovered that Douglas was at school.

Bold & The Beautiful Spoilers – Ridge Forrester Gets A Safety Update

Next on B&B, Charlie Webber (Dick Christie) and Jack Maclaine (Todd McKee) will want to talk with Steffy and Ridge about safety. They’ll take the two CEOs to the storage area and update them on the status of the operation there. As it turns out, the hazard team will be in the process of cleaning the vats that contained the hydrofluoric acid. They’ll discuss the dangerousness of the situation, and Ridge will announce that he doesn’t want anyone getting hurt.

Back in the CEO office, Steffy will be disturbed by the hazard posed in the storage area, and she and Ridge will discuss before speaking about Thomas once again. Ridge will be concerned about Hope Logan (Annika Noelle) possibly manipulating Thomas into signing the adoption papers. With this on his mind, he’ll leave Thomas a voicemail.

Next, on Thursday’s new episode of B&B, Hope will be feeling incredibly guilty by what happened the night before with Thomas. She’ll think back to what happened, when she shoved Thomas to get away and he fell into the vat of “acid.” She’ll be shaken by the memory and will try to text Thomas again.

Hope will then talk with Brooke Forrester (Katherine Kelly Lang) and she’ll lament about killing Thomas last night. The Liam Spencer (Scott Clifton) will walk in and announce that Beth Spencer (River Davidson and Madeline Valdez) is with the babysitter before noticing that something’s clearly wrong with Hope.

Liam will wonder what’s the matter, plus he’ll want to know what happened with Thomas the night before. Hope will absolutely stun him when she says that Thomas signed the adoption papers and gave her joint custody of Douglas. Liam will marvel that Hope actually got Douglas away from Thomas, but he’ll caution that this will change things for them now.

Next on B&B, Liam will announce that he’s decided to go back to work for his father at Spencer Publications, but he’ll be concerned about leaving Forrester, especially since Thomas will still be working there alongside Hope. Brooke will offer reassurance and will ask him to relay to Bill Spencer (Don Diamont) that she’s happy about the situation.

Once Liam leaves, Hope will be upset because she doesn’t want to lie to Liam about what happened. Brooke will do her best to reassure her daughter, but Hope will get upset and say again that she’s responsible for Thomas’ death. Brooke will think that they need to find a way to get through this horrible situation, and she’ll tell Hope that she was only trying to protect Douglas and that what Thomas did was sick.

Finally, on Thursday’s new episode of B&B, Hope will relive what happened with Thomas once again, and she’ll think that there’s only one thing to do at this point, and that’s to tell Ridge everything that happened.