Emmerdale Spoilers: Maya Stepney’s Fate To Be Revealed on Trial Verdict Next Week 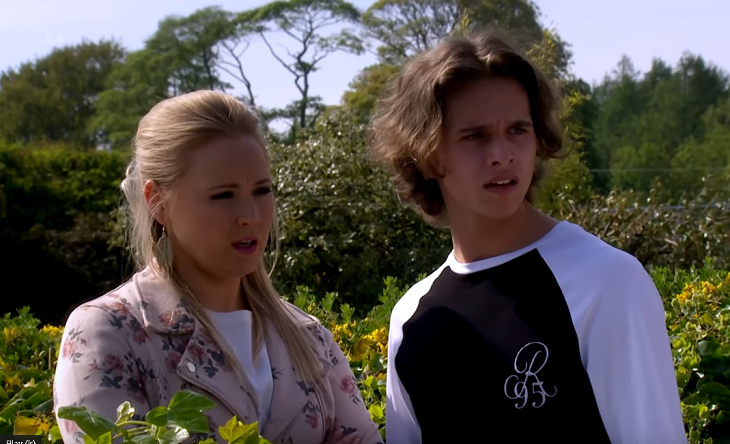 On Emmerdale, viewers will finally learn Maya Stepney’s (Louisa Clein) fate once the verdict of her court trial is revealed next week.

In an interview, Clein said, “I still don’t think Maya accepts what she’s done is wrong, therefore I don’t believe she regrets it.”

“She probably still has feelings for Jacob and as she heads towards the court appearance she’s in damage control mode. Things have gone beyond any rational sense and now it’s about survival and what will happen to her after the situation is resolved – one way or another,” she added.

Meanwhile, David Metcalfe (Matthew Wolfenden) continues to feel guilty of what had happened to Jacob Gallagher (Joe-Warren Plant). He tries to make amends but Jacob is still not in a forgiving mood. The schoolboy is still under Maya’s spell and refuses to admit that she abused him.

Later, Jacob scares off a group of schoolgirls who confronted Maya. She knows they cannot be seen together, so she tells him to go away. But with Jacob’s persistence, the pair ended up kissing in Maya’s car. If someone finds out what they’ve been doing, Maya might get a heavier sentence.

Viewers may recall that she tried to get a lighter trial verdict by pleading guilty only to exchanging inappropriate texts with Jacob. If they’re seen together kissing, she might end up behind bars for good.

Emmerdale Spoilers: Will Maya Get What She Deserves?

It’s been a rough past few days for the school teacher but many fans would agree that she got what was coming. Last week, Maya was violently attacked by an unknown individual and David was the prime suspect. For those who have seen Emmerdale’s latest episode, they would know who the real culprit is behind her brutal attack. She revealed who assaulted her after David Metcalfe tracked her down at the hospital. Jacob’s father was the primary suspect as authorities considered the possibility that he may have taken matters into his own hands after all she’s done to him.

Viewers have been furious with her character and many of them are keen to see her go to jail for grooming Jacob. Maya may finally get what she deserves if the court finds her guilty next week.

However, he also admitted that it wasn’t easy since they had to do night shoots. For him, it was a different, challenging, but fun experience, in general. As always, more detailed Spoilers and Breaking news will appear here on Soap Opera Spy!